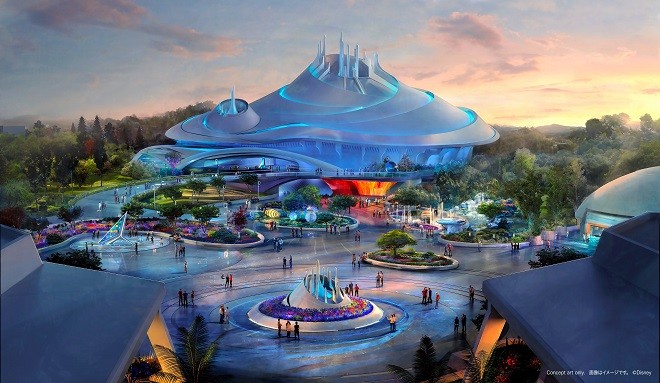 An artist’s rendition of the new Space Mountain attraction and its surrounding area set to open in 2027 (Provided by Oriental Land Co.)

After four decades, Oriental Land Co. plans to close its popular Space Mountain attraction at Tokyo Disneyland in 2024 and replace it with a new version, which will open in 2027.

The Tokyo Disney Resort operator will spend about 56 billion yen ($440 million) to expand its surrounding area to add a plaza.

The space-themed indoor attraction has been operating since 1983 when the theme park opened.

It is centered around a roller coaster offering riders a feeling of blasting off through space.

The new version will retain the original concept and will be upgraded with special effects.

Park visitors can experience lighting and sound effects in the plaza adjacent to the attraction.

Oriental Land also reported 8 billion yen in net profits for the fiscal year ending in March 2022. In comparison, the company posted a net loss of 54.1 billion yen the year before.

It also forecasts increased sales and profits for the business year ending in March 2023.

The recovery largely owes to the fact that Disneyland and Tokyo DisneySea remained open throughout the year although the two parks restricted the number of visitors and operated on shortened hours due to a state of emergency and other conditions.

The number of visitors to the twin parks totaled 12.05 million, up 60 percent from the previous year.