Supreme Court justices: Voters abroad should be able to review us 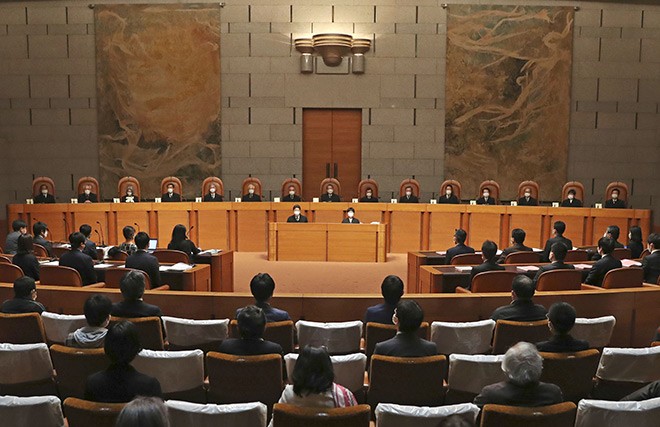 The Supreme Court listens to arguments in a lawsuit filed by overseas voters who want to review the performances of top court justices. (Pool)

The Supreme Court on May 25 ruled as unconstitutional the absence of a system that would allow Japanese overseas voters to review the performances of justices on the nation’s top court.

Specifically, the court criticized the current law on the review process because it contains no provisions for giving overseas voters the opportunity to judge the justices.

The ruling means the government will have to revise the law to allow voters abroad to evaluate top court justices in the next Lower House election.

This was the 11th Supreme Court ruling since World War II that has found a specific law to be unconstitutional.

Overseas voters had long demanded to be able to cast ballots in national elections, and laws were gradually amended to allow them to vote in all constituencies in Lower House and Upper House elections.

But the central government never took steps that would allow these voters to gauge the fitness of Supreme Court justices.

Voters mark an X beside the name of a Supreme Court justice they feel is unfit for the top court.

Any justice receiving a majority of X ballots faces dismissal. So far, no justice has been removed through the review system.

Five plaintiffs, including Kazuhiro Soda, a documentary filmmaker who resides in the United States, filed the lawsuit after they were unable to review the performances of Supreme Court justices in the October 2017 Lower House election.

The government had argued that the review was not as important as voting for lawmakers. It also said the paperwork of printing the names of the justices under review and mailing those ballots to overseas voters by election day was logistically difficult.

The Tokyo District Court in May 2019 and the Tokyo High Court in June 2020 both ruled the current law was unconstitutional.

The high court went even further and strongly urged the government to revise the law so that overseas voters could review Supreme Court justices in the next Lower House election.

According to the internal affairs ministry, there were 95,909 registered overseas voters as of September 2021.