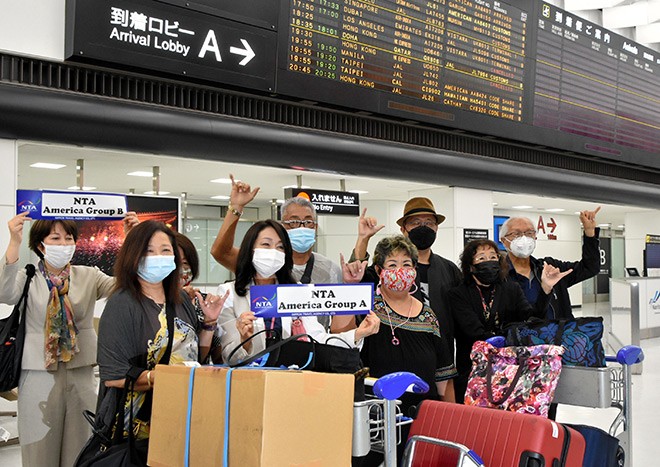 Members of an experimental tour organized by the Japan Tourisml Agency arrive at Narita Airport from the United States on May 24. (Shinya Matsumoto)

Japan was preparing to allow more foreign tourists to enter the country in June after it accepted a first group from overseas on an experimental basis, sources said.

The number of tourists will still be limited, the sources said.

The first foreign tourists in more than two years arrived in Japan on May 24 for an experiment on whether the country can safely reopen its borders to travelers in the COVID-19 pandemic.

The group from the United States landed at Narita Airport on the outskirts of Tokyo on the night of May 24.

Nadine Shimabukuro, one of the seven participants, joined the tour organized by the government’s Japan Tourism Agency.

Shimabukuro, a Hawaiian who operates a travel company, said she will check whether precautions against COVID-19 are adequate during the tour in Japan.

She said it took about two hours to complete the entry procedures at the airport, including testing for the novel coronavirus.

Shimabukuro said the procedures could be sped up, noting that participants of the tour had taken the virus test when they left the United States.

The seven Americans are among around 50 people who can enter Japan on government-monitored sightseeing programs. The others will come from Australia, Singapore and Thailand.

They are expected to visit 12 prefectures, including Chiba and Tochigi, during their stay by using bullet trains or domestic flights.

Most of the tour participants are involved in the tourism industries of their home countries, according to the Japan Tourism Agency.

Attendants from Japanese travel companies will join the tours to check whether participating hotels and restaurants provide adequate instructions on COVID-19 protocols, such as mask wearing and the use of hand sanitizers.

The attendants will also examine response procedures if an infection is detected among the tourists.

Based on the findings of the experimental tours, the government will set guidelines for travel agencies and hotels and decide on whether to open the border to more tourists.

Tourists will be among 20,000 international arrivals Japan will accept a day starting from June 1, up from 10,000.

The country has raised the number of foreign visitors allowed to enter in stages this year, but tourists were not among them.

The initial tourists will have to join group tours for entry because they will be easier to manage in terms of taking precautions against the virus.