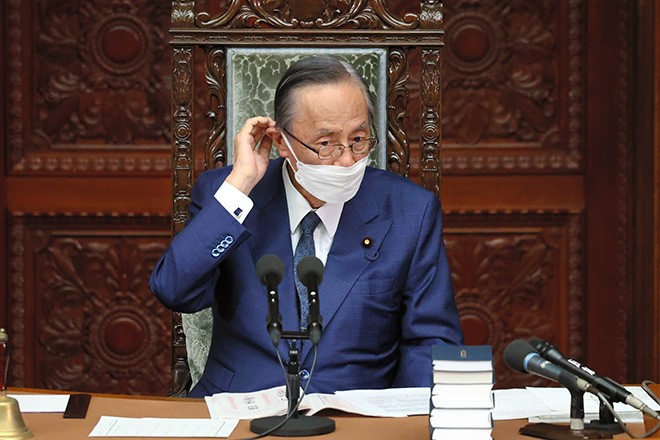 Lower House Speaker Hiroyuki Hosoda is denying allegations he made “sexually harassing comments” to female reporters and asked one of them to come to his home late at night.

He said he will consider launching a lawsuit against the outlet that published the politically explosive allegations.

Hosoda, 78, disavowed the claims when he addressed reporters in the Diet building on May 25, the first time he spoke with the media since the weekly magazine Shukan Bunshun published the story.

“I sent the magazine a complaint letter on Monday,” Hosoda said. “All I can say was in the letter and my position hasn’t changed.”

The issue of Shukan Bunshun that went on sale on May 19 reported alleged inappropriate behavior by Hosoda toward multiple female reporters, including asking if they have boyfriends, and that he said to one reporter late at night on the phone, “Why don't you come to my home now?”

Hosoda, who has maintained that the allegations are “absolutely baseless,” said he sent his letter of complaint to the magazine on May 23.

Then, in its latest issue put on sale on May 26, the magazine published a follow-up story. It cited multiple sources that said Hosoda told the female reporter, “A policeman is standing (guard at my home), so you will be OK. Come to my home.”

In response to the latest report, Hosoda published a written statement disputing the claims on the same day.

“I have already registered my strong complaint about the report to say that it is baseless. However, I once again would like to firmly complain about another article of similar content.”

The statement also said he will discuss the matter with his lawyer and consider suing the magazine once the current Diet session is over.

Hosoda has long been an influential figure within the ruling Liberal Democratic Party, but left his position in the party when he became speaker last year as part of the custom to remain nonpartisan in Diet debate.

Members of the ruling and opposition parties are demanding Hosoda explain himself.

“If the report is true, (Hosoda’s behavior) is despicable,” Sumio Mabuchi, chief of the Diet Affairs Committee of the main opposition Constitutional Democratic Party of Japan, told reporters on May 25.

He suggested the LDP should investigate the matter, warning it “could impact” the current Diet session, which is dealing with the government’s draft supplementary budget.

Fumitake Fujita, secretary-general of Nippon Ishin no Kai (Japan Innovation Party), said at a May 25 news conference that Hosoda may need to resign over the matter.

“If the media report is true, Hosoda should not only be criticized but also should consider resigning from his position.”

Prime Minister Fumio Kishida has not weighed in on the matter.

In a plenary session of the Lower House on May 25, an opposition party lawmaker asked him, “Is Hosoda worthy of being speaker?”

Kishida said in reply, “I’m not in a position to give my opinion (on the matter) as head of the government.”

However, even some in the LDP are demanding that the party should formulate a tougher response.

One former Cabinet minister suggested there could be electoral consequences for not responding swiftly enough.

“In this day and age, we can’t protect anyone accused of sexual harassment,” the former minister said. “This issue might impact the Upper House election (in the summer) if the party doesn’t react quickly.”