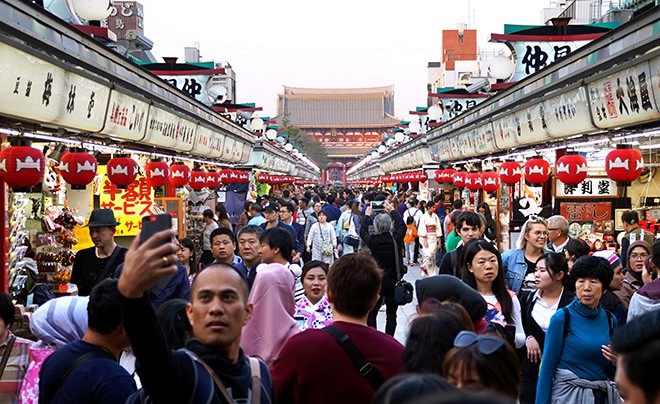 The two-year ban on foreign tourists entering Japan will be lifted on June 10, Prime Minister Fumio Kishida said on May 26, but certain restrictions to counter COVID-19 will remain in place.

“While observing infection trends in the future, we will seek to gradually allow in more visitors to levels of normal times in the past,” Kishida said in a speech.

The government will also move to resume international arrivals at New Chitose Airport in Hokkaido and Naha Airport in Okinawa Prefecture in June.

The government is currently letting in small tour groups of visitors on a trial basis.

After the ban is lifted, those allowed to enter Japan will also initially have to be on similar group tours, sources said.

They will be included in the daily quota of 20,000 foreign arrivals to be implemented from June 1. The daily number is currently 10,000.

The government on May 26 also announced its three categories of COVID-19 risk assessment for countries and regions.

Ninety-eight nations were placed in the lowest risk “blue” group, including the six other nations in the Group of Seven as well as South Korea and China.

Travelers from those countries will be exempted from virus tests and quarantines after their arrival in Japan.

The middle risk “yellow” group has 99 nations, including India. Arrivals from those nations will be required to take virus tests and self-quarantine at home for three days. But if they have received booster shots of the COVID-19 vaccine, both requirements will be waived.

Passengers traveling from those nations will be required to take the virus tests upon arrival and isolate for three days at designated quarantine facilities.

Some experts have raised concerns about the eased border controls.

Atsuo Hamada, a specially appointed professor of travel medicine at Tokyo Medical University, urged the government to be flexible in its decisions, saying tourists from abroad could have an unexpected effect on infection trends.

(This article was written by Kohei Morioka and Kai Ichino.)