Leader of Japanese Red Army to leave prison May 28 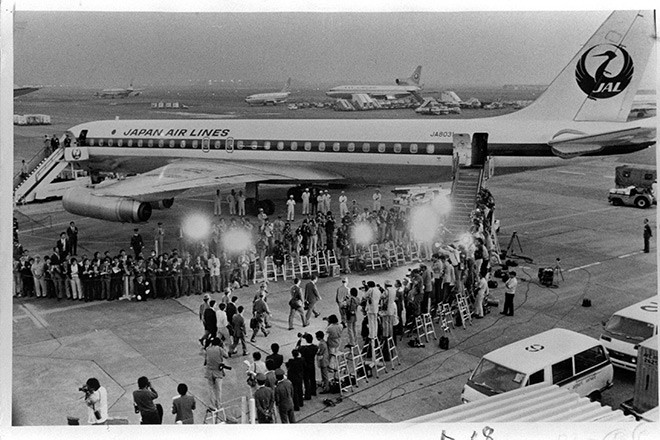 Japanese Red Army members board a plane at Tokyo’s Haneda Airport on Oct. 1, 1977, after the government complied with a demand for their release from prison. (Asahi Shimbun file photo)

Fusako Shigenobu, leader of the Japanese Red Army terrorist group that went on an international hijacking and kidnapping spree about a half century ago, will be released from prison on May 28.

Shigenobu, 76, was sentenced to 20 years in prison in connection with the September 1974 attack and hostage-taking by the Japanese Red Army at the French Embassy in the Hague, Netherlands.

She will be released having completed her term.

In 2001, a year after she was arrested in Osaka, Shigenobu announced the disbanding of the Japanese Red Army.

But police officials insist the group still poses a possible danger, even though all seven members on the international most wanted list are in their 70s.

The officials said there was a possibility that some are already back in Japan and waiting to team up with Shigenobu after her release.

Her supporters said she would be seeking medical care in her first days of freedom.

The Japanese Red Army first came into the public spotlight when three members carried out an attack on Lod Airport in Tel Aviv on May 30, 1972, that killed 26 people and injured scores.

Among the subsequent incidents carried out by the Japanese Red Army was the 1977 hijacking of a Japan Airlines flight over India.

The group demanded that the Japanese government release a number of imprisoned comrades. The government complied, releasing six Japanese Red Army members and allowing them to leave the country.

Those incidents led Japanese police to beef up measures to deal with international terrorist groups. Tighter security measures were also introduced at airports around the world due to the actions of the Japanese Red Army.

Shigenobu secretly returned to Japan but was arrested in Osaka in November 2000.

(This article was written by Shingo Tsuru and Shimpachi Yoshida, a senior staff writer.)