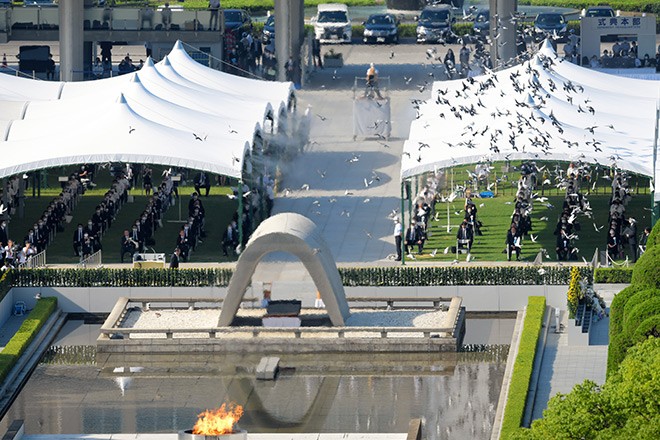 Hiroshima and Nagasaki officials have decided not to invite representatives from Russia to their annual ceremonies marking the atomic bombing of the cities in response to Moscow’s invasion of Ukraine.

The two cities also said representatives from Belarus, which supports Russia, will not be extended an invitation.

“We really wanted to invite them, but the reality is difficult,” Nagasaki Mayor Tomihisa Taue said on May 26.

The ceremonies, to be held on Aug. 6 and 9, will mark the 77th anniversary of the atomic bombings of both cities.

Two cities have been calling for the abolition of nuclear weapons by sharing with the world about their experiences as the only cities that suffered atomic bombings. Some people say the latest move could hamper such efforts.

Taue expressed the main reason for not inviting the two nations was that protesters would be drawn to the events if representatives from the two countries attended.

“We would like the ceremony to carry a solemn tone,” he said.

Hiroshima made the decision on May 20.

“I don’t want the ceremony to be used as a political football,” Hiroshima Mayor Kazumi Matsui said at a news conference on May 26.

He said the city was concerned some countries would decide not to attend the event if Russia was invited.

Matsui had indicated earlier this month that he had intended to invite Russia, as they do every year.

“I will send out invitations because we want the country to reconsider the current situation,” he said.

Hiroshima officials consulted with the central government regarding whether to invite representatives from the two countries, according to a city official.

The Foreign Ministry reportedly requested that they not extend invitations, saying the government’s position could be misunderstood and lead to diplomatic issues.

“We have a mission as an atomic-bombed city, but we can’t ignore the government,” the Hiroshima official said.

Meanwhile, the city of Nagasaki said it didn’t consult with the government. The city said the mayor made the decision as the organizer.

“The organizers decided to ‘cancel’ our country under the pretext of the special operation in Ukraine,” he posted on social media on May 25.

Galuzin added, “The numerous bogus insinuations about the alleged possibility of Russia using nuclear weapons in Ukraine are being dishonestly spread.”

Takehisa Yamamoto, 78, who served as a representative of the atomic bomb survivors in the ceremony in Hiroshima last year, said he doesn’t agree with the city’s decision.

He said peace will not come just by excluding Russia, even though he feels a representative from the nation should not attend.

“The role of an atomic-bombed city is to increase the number of people who wish for peace, beyond differences in thinking,” Yamamoto said. “Now is the time to invite Russia.”

On the other hand, Takeo Matsuki, 78, who also served as a representative, said, “I don’t know why representatives of the country conducting a war should come to the ceremony to pray for peace.”

Matsuki added he can understand the city consulting with the government and deciding not to invite them.

“The ceremony has the universal purpose of ‘aiming for peace for all mankind.’ The decision should not be made in relation to the recent issues or the government policy of the time,” said Mitsuru Kurosawa, a professor emeritus of international law at Osaka University.

Kurosawa said the country should express its opposition to Russia in other ways.

But Yasushi Funatsu, a professor of international politics at Hiroshima Shudo University, said, “If we invite Russia, the nation could use the invitation for political purposes as the country insists its aggression is for peace.”

“Even if the city of Hiroshima invites them under its responsibility, the world would frown upon Japan,” he added. “Some countries could refuse to participate in the ceremony, and some countries could even raise doubts about holding the G-7 summit next year in Hiroshima.”

(This article was written by Tabito Fukutomi, Takahiro Okubo and Mami Okada.)