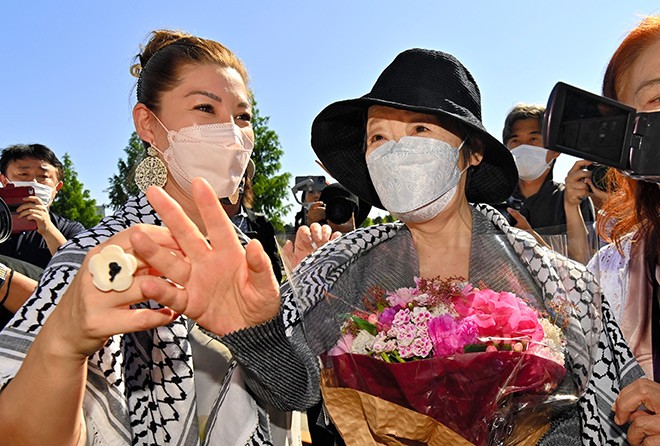 Fusako Shigenobu, right, speaks with reporters after her release from prison on May 29 while her daughter, Mei, looks on. (Hiroyuki Yamamoto)

Fusako Shigenobu, founder of the Japanese Red Army group that staged a series of terrorist attacks a half century ago, was released from prison May 28 after serving a 20-year sentence.

Her lawyers and supporters waited outside the East Japan Medical Correction Center in Akishima, western Tokyo, to greet Shigenobu, 76, as she walked free around 8 a.m.

A sound truck was also parked nearby blasting indignance over the release of an individual who headed an international terrorist group that went on a hijacking and kidnapping spree in the 1970s.

Shigenobu spoke with reporters in a nearby park and apologized for the actions of the Japanese Red Army.

“In our battle 50 years ago, we injured innocent strangers by taking hostages,” she said. “I apologize for the trouble caused to many people.”

She went on to say that her immediate goal was to “concentrate on taking care of my illness.”

Shigenobu was placed on the international most wanted list for masterminding the September 1974 attack and hostage-taking by the Japanese Red Army at the French Embassy in the Hague, Netherlands.

She was arrested by Osaka prefectural police in November 2000 after secretly returning to Japan. She was given a 20-year prison sentence for the crime.