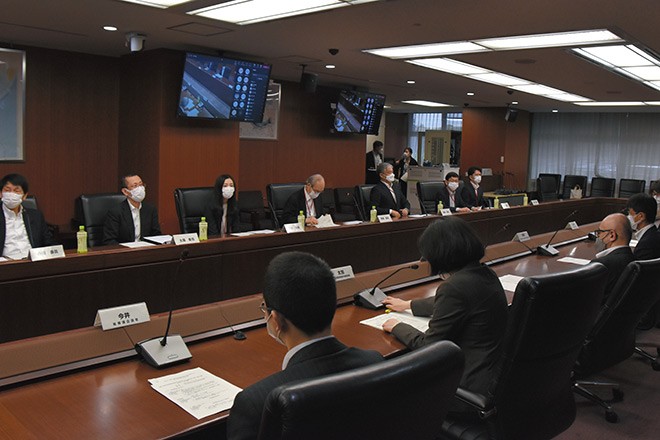 A panel of experts meets May 13 to figure out how to correct construction industry contract statistics. (Hirotaka Kojo)

The infrastructure ministry appears to have learned little from a scandal over its longstanding practice of sloppy statistics gathering that put gross domestic product (GDP) and other important economic data out of kilter.

In January, an investigative panel confirmed that figures for construction industry contracts had been wrong for decades. The scandal ensnared 10 high-ranking ministry bureaucrats who faced disciplinary measures, including pay cuts.

One of those senior officials ended up playing a key role in the secretariat set up to help a panel of experts tasked with correcting the statistics to more accurately reflect the true situation.

The bureaucrat was tapped due to time constraints on helping the panel and the fact that no one else had the same level of expertise, according to a ministry source.

The panel was established in January. It released a report May 13 that said the double counting of construction contracts meant the figure released for fiscal 2020 was inflated by 3.6 trillion yen ($28 billion), or about 4.8 percent of the total.

The bureaucrat played a central role among the dozens of ministry bureaucrats assigned to assist the panel and in frequent contact with panel members.

The report in January found that the bureaucrat took over the section handling construction contracts in August 2020 and continued with the double counting practice carried out by predecessors. The report also said the bureaucrat avoided offering a clear explanation when the Board of Audit looked into the effects of the shoddy statistics gathering practices.

As a result, the bureaucrat received a 10 percent salary cut for one month.

A separate report released by the infrastructure ministry this month said the bureaucrat failed to correct another statistical error regarding the construction contracts.

Shuya Nomura, a professor of law at Chuo University in Tokyo who has served on several government panels, said the secretariats set up to support such panels had the potential to wield enormous clout over final findings.

“As one of those involved in the initial problem, (the bureaucrat) could have been motivated to minimize the effects,” Nomura said.

He added that a third party was needed in unavoidable instances when an individual involved in the original problem proved to be indispensable in finding a solution.

(This article was written by Yoichiro Kodera and Yoshitaka Ito, a senior staff writer.)