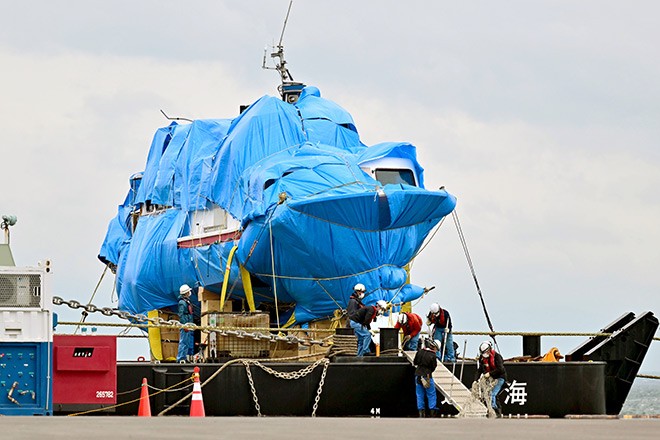 Covered in blue plastic sheets, the Kazu I pleasure boat arrives at the Port of Abashiri in Hokkaido aboard a barge on May 27. (Takayuki Kakuno)

ABASHIRI, Hokkaido--The Japan Coast Guard took the unusual step of obtaining a warrant to take possession of the just-salvaged Kazu I pleasure boat as part of its investigation into the April 23 sinking off the Shiretoko Peninsula that is thought to have claimed 26 lives.

The Kazu I was hoisted from the seabed early May 27 and onto a barge now anchored at the Port of Abashiri.

Investigators were to go over the pleasure boat from top to bottom along with Seiichi Katsurada, 58, the president of Shiretoko Pleasure Boat, the operator of the Kazu I, from the afternoon of May 28.

Blue plastic sheets were installed on poles arranged around the boat. Seawater was still being removed from the Kazu I.

Investigators plan to take a close look at the engine room in their search for evidence.

At this point, Coast Guard officials say that both Katsurada and Noriyuki Toyoda, the skipper who is among those still missing, appear to have been negligent in ensuring the passengers would arrive back to port safely.

In addition to checking on damage to the boat, Coast Guard officials will also look into whether the proper safety equipment was kept onboard.

Coast Guard officials normally do not require a warrant to pursue an investigation. They often examine the boat involved in an accident at the scene where it occurred.

But due to the gravity of the accident and the possibility the investigation could take months, the Coast Guard decided to obtain a warrant to seize the Kazu I.

The boat could be transferred from the barge to dry land as early as May 30.

That will allow investigators to closely examine the boat for damage and the condition of the engine, as well as analyze data that may be stored on meters and gauges.