Director Kore-eda returns to Cannes with film about baby box 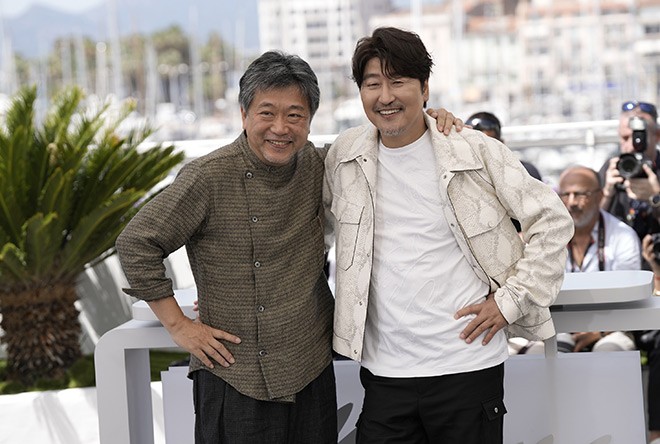 Director Hirokazu Kore-eda, left, and Song Kang-ho pose for photographers at the photo call for the film “Broker” at the 75th international film festival in Cannes, southern France, on May 27. (Invision/AP)

CANNES, France--“Shoplifters” director Hirokazu Kore-eda returns to the Cannes Film Festival with “Broker,” another tale of misfits from society’s margins.

This time, the film centers on the use of a “baby box,” a controversial method of anonymously dropping off newborns to be cared for by others used in Japan, South Korea and other parts of the world.

“In Japan, the biggest criticism was that the baby box was making it too easy for the mothers to give up on their responsibility to raise the child. But, on the other hand, some people said that these boxes were actually saving lives because otherwise, the children might die,” he said. “I just thought that was an interesting argument to base a film on.”

The director says his interest in the issue dates back to 2013. “When I was making ‘Like Father, Like Son.’ I researched the Japanese adoption system and it was then that I learned that Kumamoto Prefecture had Japan’s only baby box. So I got interested in that and started to research it. And I learned that Korea had the same kind of baby box, but that they had about 10 times as many babies put in baby boxes in Korea as in Japan,” he said.

“And then in 2016, I came up with the idea for a short plot based on the Korean baby box with Song Kang-ho, starring as a broker.”

The Japanese director won the Jury Prize at Cannes in 2013 for “Like Father, Like Son” and won the Palme d’Or at the 2018 festival for his highly-acclaimed movie, “Shoplifters.”

Single mothers have long faced stigma in South Korea because pregnancy when out of wedlock is considered inappropriate. They are often pressured and shamed into giving up their children because of deeply sexist and conservative culture, birth registration laws stacked against them, and a largely privatized adoption industry.

“They can find themselves disadvantaged by the system,” he said. “And the mother is the easiest one to criticize because the father isn’t there anymore. So he escapes the criticism.”

When asked whether the film poses a question about what it means to be a family today, Kore-eda called the tale “the story of a pseudo-family.”

“But more important in this case is the two women who have chosen not to be mothers. They are at the center of the story, as well as this life that has been thrown away. So, for me, in this case, life was more central to the film than the family.”