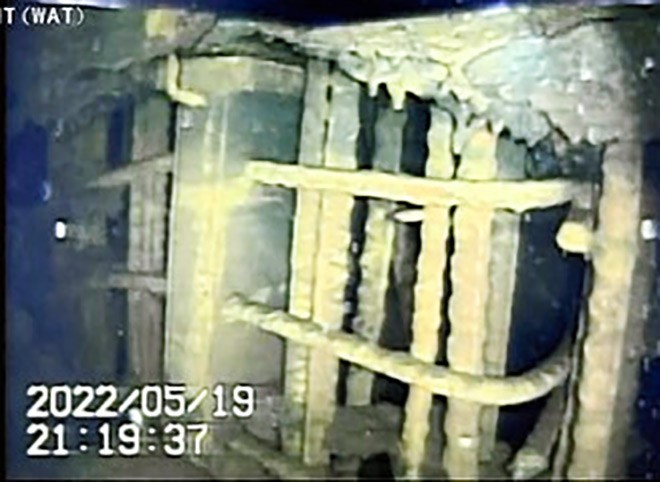 The exposed metal framework of the base supporting the pressure vessel at the No. 1 reactor of the Fukushima No. 1 nuclear power plant (Provided by IRID and Hitachi-GE Nuclear Energy Ltd.)

Alarm bells are sounding over signs the heavily damaged structure of the Fukushima No. 1 nuclear power plant may be too flimsy to withstand another major earthquake.

Photos taken by a remote-controlled robotic device sent into the No. 1 reactor found that a large portion of the concrete base supporting the pressure vessel appears to have melted, leaving only a metal framework holding up the pressure vessel.

Experts are now saying the remaining structure may not be strong enough to withstand a big earthquake, a troubling prediction given that the region has been hit by a number of strong temblors in recent months.

An official with the Agency for Natural Resources and Energy who is handling decommissioning work said at a May 26 news conference the remaining structure could not be described as safe, noting that a large portion of the concrete base only had the metal framework remaining.

At a news conference the previous day, Toyoshi Fuketa, chairman of the Nuclear Regulation Authority, said, “We remain concerned about whether it will withstand a strong quake.”

The Fukushima plant went into triple meltdown after the magnitude-9.0 Great East Japan Earthquake in 2011 that generated devastating tsunami.

The No. 1 reactor bore the brunt of the damage at the nuclear complex. Photos taken by the remote-controlled robot showed not only the exposed metal framework but what looked like a pile of melted fuel on top of the framework.

Officials believe the meltdown at the No. 1 reactor caused most of the fuel to melt through the bottom of the pressure vessel. The plant’s operator, Tokyo Electric Power Co., suspects the tremendous heat from the nuclear fuel may have melted the concrete of the base supporting the pressure vessel.

The cylindrical base is 1.2 meters thick with a diameter of about 6 meters. It supports the pressure vessel, which weighs about 440 tons.

A fiscal 2016 estimate by the International Research Institute for Nuclear Decommissioning said that the seismic resistance of the structure would not be an issue even if one-quarter of the base was structurally compromised, along with other damage to the interior of the pressure vessel.

But the latest photos captured only about 25 percent of the base, prompting the agency official to speculate the concrete around the entire base had melted.

TEPCO officials plan to send in another robot to take photos of the interior of the base to better grasp the seismic resistance of the structure.

Fumiya Tanabe, a former senior researcher at what is now the Japan Atomic Energy Agency, offered an even scarier possibility.

Noting that the interior of the base lies directly under the reactor core there, he said it was possible that piping hot nuclear fuel flowed into the interior.

“The metal framework in the interior of the base may even have melted,” Tanabe said.

That is a particularly worrisome thought in light of the fact that quakes with a seismic intensity of upper 6 on Japan’s maximum scale of 7 hit off the coast of Fukushima Prefecture in February 2021 and March 2022.

Tanabe said that in a worst-case scenario, another strong quake could cause the pressure vessel to topple over, making work to remove the melted fuel that much more difficult.

He recommended that work start quickly to assess the extent of damage.