Sakima again to run against Tamaki in Okinawa election 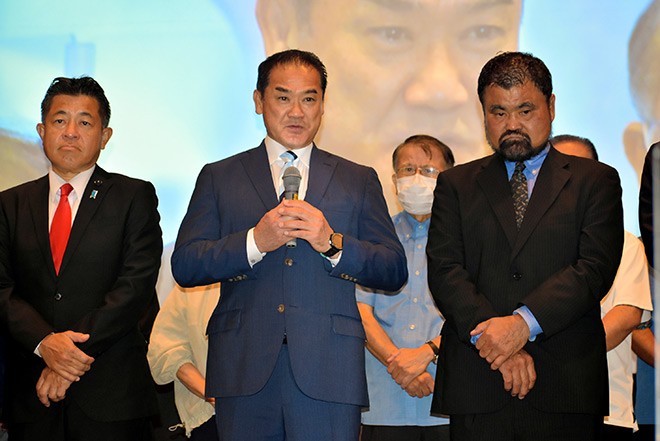 Atsushi Sakima, center, is picked on May 28 by the prefectural chapter of the ruling Liberal Democratic Party as candidate in the Okinawa governor election. (Yoshichika Yamanaka)

NAHA--The ruling Liberal Democratic Party picked a former mayor who lost to Denny Tamaki in the gubernatorial election four years ago to run against him again in the poll to be held in September.

Atsushi Sakima, 57, who is also a former prefectural assembly member, was the choice of the Okinawa prefectural chapter of the LDP after winning the most votes in a 25-member selection panel on May 28.

Tamaki is expected to announce his bid to seek re-election next month, in what is widely expected will be a replay of the previous race in 2018.

Sakima, unlike Tamaki, has adopted a nonconfrontational stance against the central government in Tokyo, which is relentlessly pushing a highly contentious reclamation project for a new U.S. base in the southernmost prefecture.

Prior to the panel’s vote, Sakima outlined his policy focused on reinvigorating the local economy by bolstering protective measures against COVID-19 so islanders feel safe in accepting tourists and interacting with others, as well as expanding financial support to the tourism industry.

Pointedly, he did not touch on the one issue that concerns voters: relocating the U.S. Marine Corps Air Station Futenma in Ginowan to Nago in the prefecture.

Tamaki, a fierce opponent of the relocation of the base within the prefecture, is in the final stage of coordinating his candidacy, which he will announce June 11, according to sources.

Official campaigning is due to kick off Aug. 25 with voting set for Sept. 11.

In the 2018 election, Tamaki, a former member of the Lower House, won 55.1 percent of ballots cast against Sakima’s 43.9 percent.

(This article was written by Yoshichika Yamanaka and Shogo Mitsuzumi.)