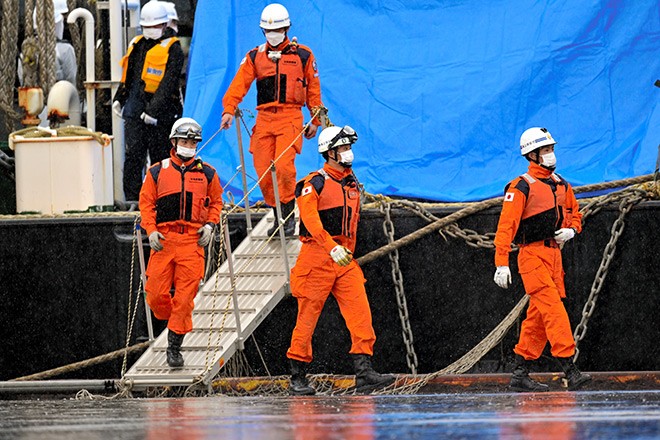 Japan Coast Guard investigators emerge from plastic sheeting shielding the Kazu I tour boat that was moved to Abashiri in Hokkaido after being raised from seabed off the Shiretoko Peninsula on May 28. (Takayuki Kakuno)

ABASHIRI, Hokkaido--The Japan Coast Guard on May 29 started an intensive three-day search involving dozens of vessels and aircraft for 12 people still missing since their tour boat sank off eastern Hokkaido five weeks ago.

The development followed the May 27 salvage of the wreck.

The search, which also involves the Self-Defense Forces and Hokkaido prefectural police, will focus on an expansive area off the Shiretoko Peninsula, where the Kazu I sank, and nearby Kunashiri Island, which is part of the disputed Northern Territories also claimed by Russia.

A total of 70 vessels and 20 aircraft will take part in the effort through May 31.

The raised boat was taken to Abashiri Port on May 27. Coast Guard investigators went over the vessel May 28 and confirmed no bodies were trapped inside following a thorough search of the engine room and storage compartment.

The Kazu I was shielded by plastic sheeting while investigators searched every corner of the boat.

Seiichi Katsurada, the president of Shiretoko Pleasure Boat, which operated the vessel, was present during the probe.

Investigators also checked for damage to the vessel and the condition of equipment.

The Coast Guard took possession of the boat by taking the rare step of obtaining a warrant, a move that reflected the significance it attaches to the case and belief it will take time to uncover all the details that led to the sinking with 26 people on board.

The Coast Guard continued its investigation May 29 in a search for clues into the April 23 tragedy.

Fourteen bodies have been recovered to date, but none has turned up after April 28.

The Kazu I is expected to be moved ashore on the morning of June 1 to allow family members of the deceased to offer flowers and prayers later that day.