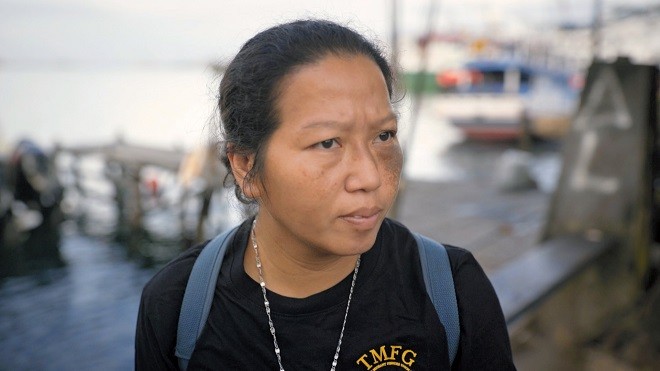 The firm texture of its meat was really pleasing to the palate. It lives up to its reputation of bringing a little piece of happiness to everyday life.

But a discomforting question arose in my mind: Who caught this fish, and where? I stopped the movement of my chopsticks for a moment to give it a think.

I had watched “Ghost Fleet,” a 2018 U.S. movie, which began showing in Tokyo and elsewhere in Japan on May 28. The documentary film pursues the subject of enslaved fishermen, an issue being raised in Southeast Asian nations.

In the film, men who were abducted and forced to work aboard fishing boats give accounts of their harrowing experiences.

One of them says he woke up to find himself in a room that was rocking and swaying side to side. Another says he was locked up on a boat for years and, when he disobeyed, he was violently beaten and put in chains.

A human rights group says thousands of similar workers have so far been rescued. It is so shocking to learn that.

The fish they caught were sent to various parts of the world under disguised labeling. I asked Patima Tungpuchayakul, a Thai human rights activist who has been working to save enslaved fishermen, if Japan was also among the buyers of the fish.

“I think it certainly was, although I have no evidence,” Patima, 46, said in answering my question online. “That’s because so many fish are being exported to Western countries and Japan.”

She said authorities in Thailand have stepped up crackdowns on illegal fishing practices, but eradicating them requires awareness on the part of those who eat fish.

“When you take a fish in your hands at a supermarket, you may be interested to know how fresh it is, but I hope you will also give thought to how those who caught it are working,” Patima said.

We are prone to take it for granted that cheap and tasty fish are always there for us to eat. But we appear to be less eager to realize that we owe that convenience to somebody else.

I felt as if the saury’s eye was glaring angrily at me for a while from beneath my chopsticks.