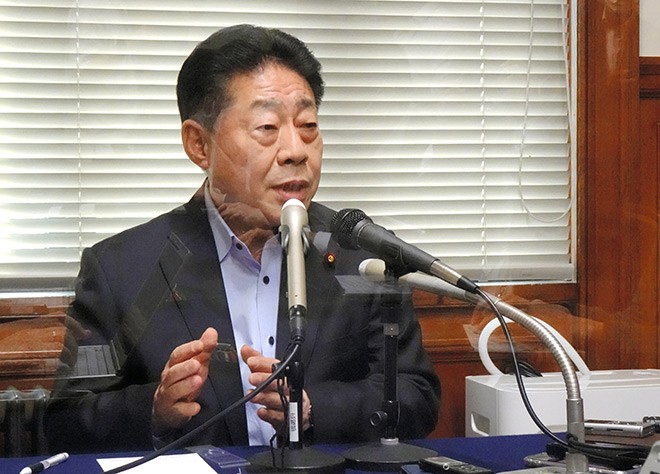 Junior coalition partner Komeito appears to be easing its opposition and leaning toward allowing Japan to strike enemy bases that are preparing to attack the country.

“I don’t think Japan should rely solely on the United States for its strike capability,” Kazuo Kitagawa, vice representative of Komeito, said during a debate program aired by Japan Broadcasting Corp. (NHK) on May 29.

He added that he thinks it is time to discuss whether Japan should possess the capability to strike enemy bases that are preparing an attack.

Komeito had previously been reluctant to even enter debates on the issue.

The possibility of the Self-Defense Forces striking an enemy base about to launch a missile against Japan was first broached by Shinzo Abe when he was prime minister.

However, Komeito objected to any connotation that the attack could be “pre-emptive.”

So the ruling Liberal Democratic Party, in recommendations submitted to Prime Minister Fumio Kishida in April, removed any mention of terms such as “pre-emptive” for such strikes on enemy bases.

Instead, such actions would fall under the term “counterattack capability.”

The LDP also proposed expanding potential targets to include the enemy’s command and control functions.

The proposals marked a departure from the long-held “exclusively defense-oriented policy” based on the Japan-U.S. Security Treaty.

During his meeting with U.S. President Joe Biden on May 23, Kishida referred to the term “counterattack capability,” saying the Japanese government will be open to “all options.”

The government intends to accelerate discussions on the new “counterattack capability” after this summer’s Upper House election. Komeito’s response to the matter holds key in the debates.

Kitagawa is expected to play a large role in negotiations between the LDP and Komeito, as he did during the ruling coalition’s talks on security legislation enacted in 2015 to allow Japan to exercise its right to collective self-defense.

At a joint news conference with Biden after their meeting, Kishida also expressed his resolve to secure a significant increase in Japan’s defense spending.

(This article was written by Taro Ono and Kazutaka Kamizawa.)