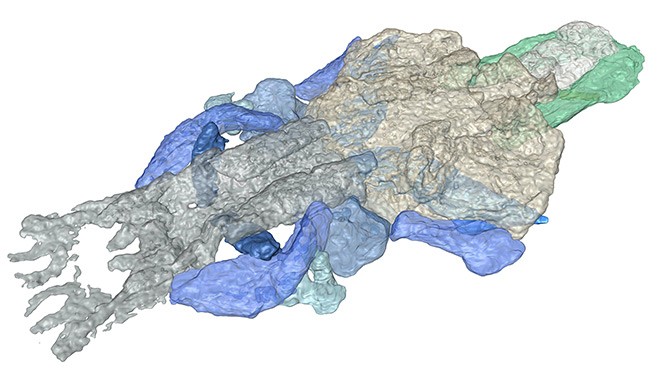 A 3-D model of Palaeospondylus’ head bones (Provided by Riken)

A mystery creature found in a 390-million-year-old stratum in Scotland was identified in Japan as a “missing link” between fish and amphibians, a research team said.

Palaeospondylus, first discovered more than 130 years ago, is likely an early ancestor of land vertebrates, scientists from the Riken research institute and other entities said.

Measuring about 5 centimeters long, Palaeospondylus looks like a small fish with a developed backbone. But it has no teeth and lacks pectoral and pelvic fins.

The first fossil of the creature was found in 1890 from what had been a lake during the Devonian Period.

Thousands of fossils have been discovered, but scientists have yet to reach a consensus on its phylogenetic position. The research team previously considered the creature as a relative of hagfish, a jawless vertebrate.

They found that the creature has commonalities with the coelacanth, a primitive fish that is referred to as a “living fossil,” and the lungfish.

For example, Palaeospondylus possesses an intracranial joint, which separates the front and back of the skull. The shape of its tail fin is close to that of Acanthostega, an extinct prehistoric amphibian.

The shapes of bones change as organisms continue to evolve. And this occurred during the water-to-land transition.

The researchers compared the characteristics of the bones of Palaeospondylus to those of other vertebrates to determine its position on the evolutionary tree. They said they believe the creature is an intermediate species between lungfish and land vertebrates.

“We could solve the mystery of a creature whose nature had remained unknown for 132 years because of its extremely unusual shape,” said Tatsuya Hirasawa, an associate professor at the University of Tokyo who serves as a visiting researcher at Riken.

The team’s findings were published in the online edition of British scientific journal Nature at (https://www.nature.com/articles/s41586-022-04781-3).