TASTE OF LIFE/ Spaghetti with tomato sauce: A rich sauce with more oil and less onion leads to successful career 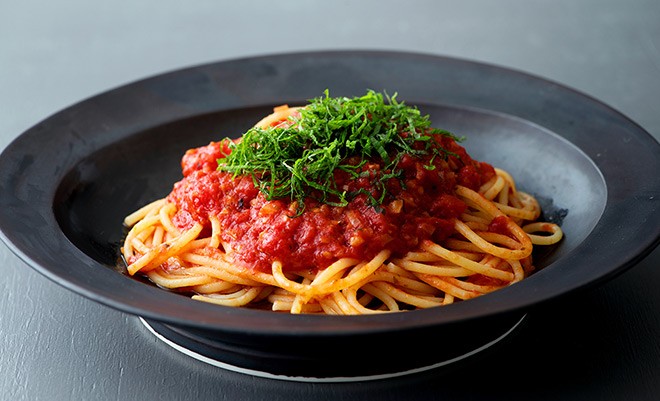 Naoya Higuchi is fascinated by questions of how to best cook tasty dishes and why a particular step in a recipe is necessary.

He analyses cooking methods and recipes for various dishes and explains his findings online and in magazines and books.

Higuchi’s career took off when the cooking school he had graduated from contacted him after he debuted as a writer and asked him to write cooking articles for an affiliated website.

The topics included what the best water temperature is for making poached eggs and how to cook steak so it is sufficiently brown on the outside but still juicy on the inside. But it was his article on tomato sauce that shot him to fame.

Higuchi had learned that many people were not happy about their own homemade tomato sauces, which tended to turn out too sour and not as rich as those offered at restaurants.

So, he asked himself why this happens, and took an empirical approach to answering the question.

Higuchi compared the recipes posted online by professional cooks and home cooks. He noticed that home-cooking recipes often involved too much onion and not enough oil compared to the professional ones.

To come up with a rich sauce that retains the refreshing flavor of tomato and can be made easily at home, he cooked versions of sauces over and over while focusing on the balance between the sourness of the tomato, the sweetness of the onion and the amount of oil.

He wrote an article introducing a recipe “with more oil and less onion.”

“The oil mellows the sour taste and provides overall depth and richness. The same goes for dressings,” Higuchi said. “Once you get this fundamental of Western cuisine, you will become better at cooking Western-style dishes.”

After he published the article, many people told him that they had read it and tried the recipe.

He was also offered a job by a person who had read the article, and Higuchi’s career as a chef blossomed. Looking back, he said, “It is as if I became a chef thanks to this recipe.”

Once you get the hang of making basic tomato sauce, you can improvise by adding bacon or asari clams.

Naoya Higuchi: Born in Tokyo in 1981, he is a writer and chef. He is a graduate of Hattori Nutrition College. He debuted as a writer with “Sayonara Amerika” in 2005 and writes about cooking and food on the online publishing platform “note.”

2. Add olive oil, onion and garlic to pot and place on medium heat. Cook while shaking pot. When vegetables have browned lightly, add canned tomato and oregano, and bring to a boil. Turn to low heat and simmer for 15 minutes. Start cooking spaghetti in hot water with salinity of 1 percent.

3. Mix while crushing tomato with whisk and add salt to taste. Remove spaghetti from pot 30 seconds before instructed time, drain and mix with tomato sauce. Serve and garnish with shiso.

Since a generous amount of oil will be used, be careful of oil splattering when a canned tomato is added. Canned whole tomatoes can be crushed easily after being simmered and softened.