Hokkaido Electric ordered not to restart its nuclear reactors 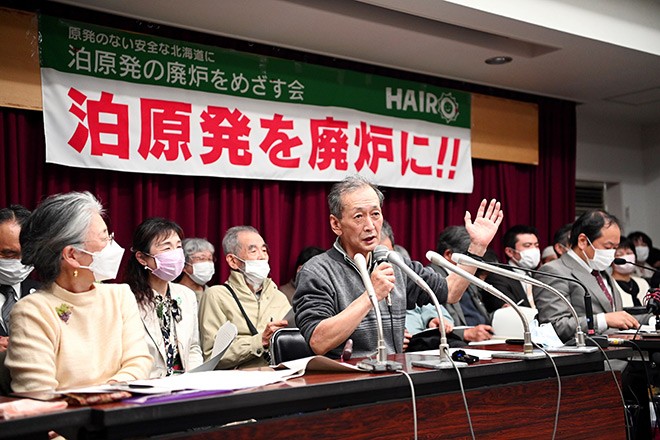 Takeichi Saito, who heads the group of plaintiffs, speaks at a news conference after the Sapporo District Court’s ruling on May 31. (Kengo Hiyoshi)

SAPPORO--In a blow to Hokkaido Electric Power Co., the Sapporo District Court on May 31 ordered that the reactors at its Tomari nuclear plant remain offline.

The utility has been seeking to soon bring the plant back into operation, as surging fuel costs for thermal power plants have pushed down its revenues.

Presiding Judge Tetsuya Taniguchi cited safety concerns in the ruling, siding with a request by more than 1,000 plaintiffs from the area who raised concerns there are not sufficient safeguards to protect it from natural disasters.

“A sea wall required under the nuclear regulations does not exist,” Taniguchi said. “The plaintiffs’ right (to life) could be violated even without judging other points of contention.”

But he dismissed the plaintiffs’ demand for decommissioning the plant, saying there is no specific circumstance that would warrant it.

The court ruling cannot force the plant to halt operations unless it is finalized at a higher court.

But it could impact the assessment by the government’s nuclear watchdog, the Nuclear Regulation Authority, which has been working for nine years to determine if the plant meets the new regulations.

A group of about 1,200 plaintiffs from in and outside of Hokkaido launched the suit against the power company in November 2011, after the triple meltdown at the Fukushima nuclear plant in March that year.

They sought a halt to the operation of the plant’s three reactors, arguing that their constitutional rights to life and health would be violated in the event of an accident involving the release of radioactive substances.

The three reactors were taken offline between April 2011 and May 2012 for regular checks and have remained idle since.

Hokkaido Electric applied for a restart in 2013, soon after the more stringent reactor regulations were enforced by the government following the Fukushima nuclear disaster.

The regulator has in the meantime been assessing whether the reactors meet the new safety standards.

But it is not clear when the assessment will end, mainly due to what the watchdog says is the utility’s lack of experts capable of engaging in discussions on safeguards against earthquakes, tsunami and volcanoes with NRA inspectors.

The central issue in the lawsuit was whether concrete danger should be anticipated by restarting the plant, which is located in the Shakotan Peninsula facing the Japan Sea.

The plaintiffs contended that an active seismic fault measuring up to 100 kilometers exists in waters about 15 km from the plant. They argued that the planned sea wall would not protect the plant from the anticipated maximum height of a potential tsunami strike.

They also said that an earthquake powerful enough to cause such a tsunami would liquify the ground and cause the sea wall to sink. And they contended that the plant is also suspected to sit along an active seismic fault.

With an overall output of 2.07 gigawatts, the plant accounted for about 40 percent of the electricity needs in Hokkaido prior to the 2011 Fukushima nuclear disaster.

But the plant remaining offline does not pose serious problems to the local power supply, partly because new thermal plants went into operation.

(This story was compiled from reports by Haruto Hiraoka and Satoshi Shinden.)