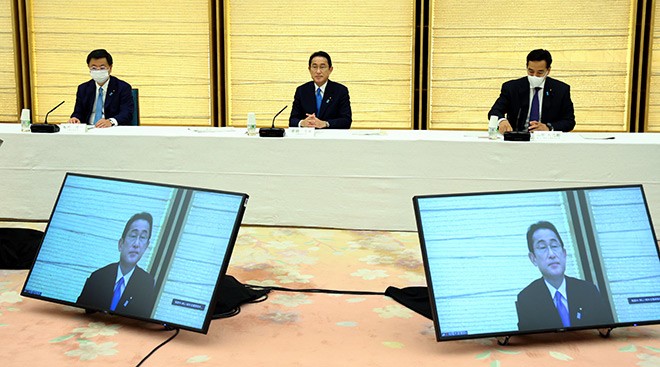 Prime Minister Fumio Kishida speaks at a meeting on “new capitalism” in Tokyo on May 31. (The Asahi Shimbun)

We believe the time has come for Prime Minister Fumio Kishida to stop labeling his economic initiative as “new capitalism.”

A draft of its execution plan, presented by the government on May 31, had nothing to say about “reinforced distribution,” an ideal that Kishida initially championed.

If it is nothing more than a rehash of growth strategies reworked over and over by previous administrations, Kishida’s project never merits the qualifier “new.”

When Kishida broached the idea at the start of his administration last autumn, his argument was as follows: Corporations hoard profits and benefits do not trickle down to workers. The profit-centered social economy is to blame for widening income disparity and accelerating global warming.

In its editorials, The Asahi Shimbun welcomed his awareness and urged the prime minister to discuss specifics.

But the draft execution plan was completely disappointing.

An emergency proposal issued by a government panel of experts in November set “growth strategy” and “distribution strategy” as the project’s two main pillars. But the draft downgraded distribution into “investment for growth.”

The bulk of the project is now about a growth strategy, such as development of startups.

The draft calls for a “thorough pursuit of growth under new capitalism.”

Some of the policy proposals may even aggravate income disparities, not correct them.

The draft promotes “doubling of asset incomes” even though substantial inequality already exists in the public’s holdings of financial assets.

It also makes no bones about “selecting young talent with good ideas and superior skills and supporting them.”

The pie will obviously become larger when the economy grows.

But letting the market call the shots will not advance the actual distribution of the shares of the pie. It will only leave the enlarged pie in the hands of large corporations and wealthy individuals.

Doing favors for a select group of people and highly profitable businesses, without fundamentally changing the reality, is precisely what forms the core of neoliberalism, which the prime minister opposes.

The government’s top priority should be to return profits to workers.

The draft plan’s main focus should have been to determine ways to force a change in behavior among businesses that are reluctant to raise wages.

But the draft plan merely notes that efforts will be made to thoroughly familiarize businesses with tax breaks to encourage wage hikes that were expanded this fiscal year.

This year’s so-called spring labor offensive resulted in a basic wage hike of less than 1 percent, which falls short of the rising prices of goods and services.

We must say that the draft has exposed the government’s lack of understanding of the reality that the mentality of business managers has not substantially changed.

The draft plan describes both rectifying the income inequality and pursing a carbon-free society as steps for achieving growth.

But there is intrinsic value in the realization of equality, and going carbon-free is the basic premise on which the sustainability of human society stands.

It is appallingly narrow-minded to see everything in terms of growth.

Ohira Kenkyukai, a study group set up by former Prime Minister Masayoshi Ohira (1910-1980), who, like Kishida, was from the Kochikai faction of the ruling Liberal Democratic Party, argued in favor of Japan changing course from its postwar policy of pursuit of economic prosperity.

The group’s assertion is said to have been studied by many ensuing administrations. The draft plan lacks any such long-range perspective.

Kishida’s economic initiative, as it stands, will never go down in history.