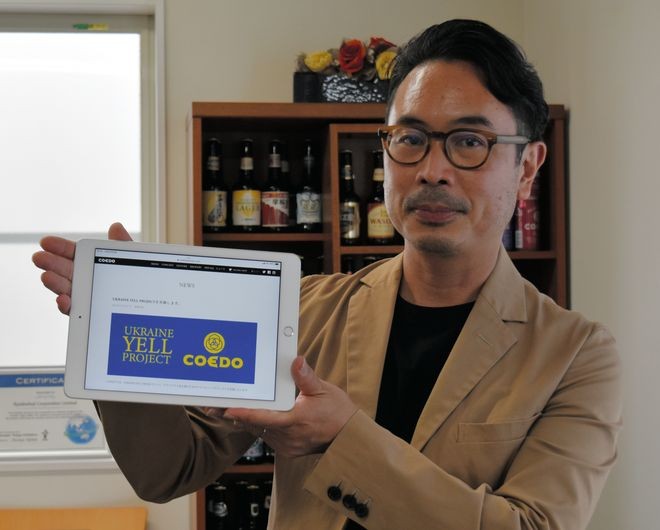 KAWAGOE, Saitama Prefecture--In response to a plea from a fellow beer maker in Europe, the Coedo craft beer brewery here is donating a percentage of its sales to war-torn Ukraine.

Shigeharu Asagiri, 48, president of Coedo brewery, became friends with Lana Svitankova, a public relations official at the Varvar beer brewery based in Kyiv, when they met at a beer event in Latvia four years ago.

He was naturally concerned about her after Russia attacked Ukraine on Feb. 24, so he sent her an email.

In her reply email in March, Svitankova, based in Switzerland, wrote: “Many people (in Ukraine) lost their jobs after Russia’s invasion. We want to show the solidarity of our craft beer community.”

Svitankova asked Asagiri to join a campaign called “Drinkers for Ukraine” to raise funds for the Red Cross humanitarian relief effort in her home country. She and others had initiated the campaign.

One of the fund-raising activities is to brew a beer named Resist based on a recipe developed by Ukrainian brewers. Proceeds from sales of the beer will help Ukraine to “resist” Russia.

The Resist beer is a rich stout with strong alcohol content. It is made of beetroot, which is also used in borscht, the national dish of Ukraine.

Since it is difficult for his company to produce a new beer, Asagiri instead started his own project to contribute immediately to the cause. Thirty percent of online sales of designated Coedo beer sets are being donated through the Japanese Red Cross Society.

He named the charity program the “Ukraine Yell Project,” saying “yell” refers to both the similar-sounding “ale” and a cheer for Ukrainians.

His ultimate wish is for the war to end as soon as possible and to interact with Ukrainian brewers again.

Asagiri said he will continue the project until the end of September.

“As the war could drag on, I would also like to consider other ways of support,” he said.

He is considering brewing the Resist beer based on the recipe.