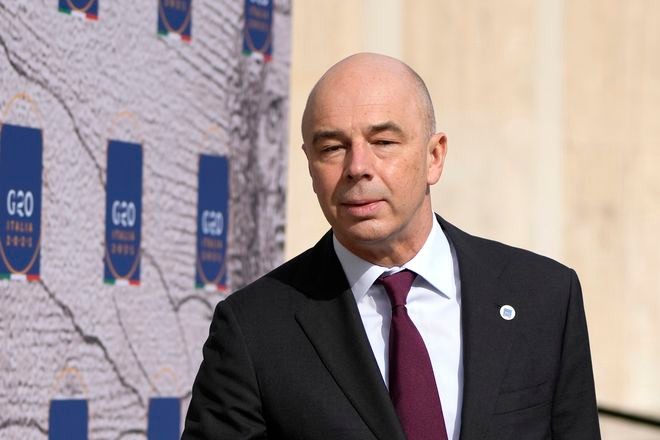 Russia's Finance Minister Anton Siluanov arrives for a meeting of G-20 finance and health ministers at the Salone delle Fontane (Hall of Fountains) in Rome on Oct. 29, 2021. (AP file photo)

NEW YORK/ LONDON--A panel of investors on Wednesday found Russia had triggered a credit event after it failed to pay nearly $1.9 million in interest on a sovereign bond, taking the nation a step closer to its first major external debt default in over a century.

The EMEA Credit Derivatives Determinations Committee (CDDC) said on its website that the committee voted yes to a question on whether a "Failure to Pay Credit Event" occurred with respect to Russia.

Russia's international 2022 bond matured on April 4 and payment of principal and interest due at maturity was not made until May 2.

Overseas holders of that Russian sovereign bond sought a ruling on whether $1.9 million in potential interest accrued during that period, which was not included in the payment, constituted a "credit event" that might allow them to collect a payout on default insurance known as credit default swaps.

The committee, whose 14 members include Citibank, Bank of America, Deutsche Bank, Elliot Management and PIMCO, agreed that the failure to pay happened on May 19 and that a request to find a resolution was submitted on May 26.

It will meet again on June 6 at 2 p.m. London time (1300 GMT) to continue the process, which could move to set up an auction to determine any CDS payouts.

There are currently $2.54 billion of net notional CDS outstanding in relation to Russia, including $1.68 billion on the country itself and the remainder on the CDX.EM index, according to JPMorgan calculations.

Russian dollar-denominated bonds were trading up 1 cent to 2.5 cents on Wednesday, Refinitiv data shows. They are in very distressed territory, ranging from 30 cents on the dollar to as low as 19 cents.

A Russian default on other debt looks inevitable, according to some investors, after the U.S. Treasury chose in late May not to extend a license that had allowed creditors to receive payments from Russia despite financial sanctions.

Russia has around $40 billion of international bonds outstanding and just under $2 billion in payments is due through year-end.

Sanctions imposed by western countries and their allies on Russia following its invasion of Ukraine on Feb. 24, as well as counter measures by Moscow, have all but excluded the country from the global financial system.

Russia's Finance Minister Anton Siluanov said last month that Moscow will service its external debt obligations in roubles if the United States blocks other options and will not call itself in default as it has the means to pay. Not all bonds allow for payment in roubles, however.

The country has said it could extend a scheme used for its gas payments to sovereign bondholders, allowing Eurobond investors to open Russian FX and rouble accounts. The money would be channelled through Russia's National Settlement Depository (NSD), which is not under Western sanctions.

Russia had nearly $650 billion of available gold and currency reserves prior to the Ukraine invasion, which it calls a "special military operation", compared to $40 billion of international debt. It also makes billions of dollars a week selling oil and gas.