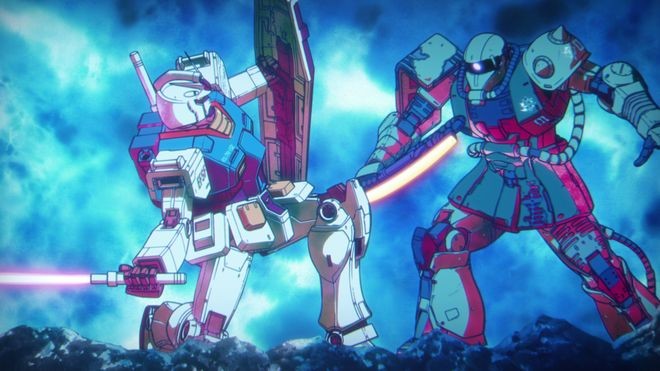 The director of "Mobile Suit Gundam: Cucuruz Doan’s Island,” a film adaptation of an episode from the 1970s "Gundam" robot anime TV show, said his latest work creates a microcosm of the whole series.

The new feature film, currently showing nationwide, is based on the TV show’s 15th episode, which aired in July 1979.

Director Yoshikazu Yasuhiko said the episode was chosen for the silver screen treatment because even though it is just one small part of a larger epic, it stands on its own as a representative story about the consequences of war and how it affects people on an individual level.

"It is a story that condenses the essence of the entire first 'Gundam,' which is a drama about nameless little ones thrown into a big situation," the 74-year-old veteran creator said.

Yasuhiko is a manga artist who has a long history with the series. He served as a character designer and key animation supervisor for the classic anime show.

In the story, the protagonist and pilot of Gundam, Amuro Ray, encounters Cucuruz Doan, a deserter of the Principality of Zeon, who raises war orphans on a solitary island.

The original episode offers a short but gratifying take on how hollow weapons and wars can be.

The film adaptation expands on that by introducing more orphans to the story, detailing their daily lives on the island. The retelling also fleshes out and enhances their interactions with Amuro.

A secret kept by Doan leads to a fight on the island, and it determines the outcome of the decisive battle between Zeon and the Earth Federation known as Operation Odessa.

Just as in the original TV series episode, Odessa in Ukraine is featured as a key locale in the story and Zeon threatens to use nuclear weapons, eerily foreshadowing the current circumstances there.

"I never knew the world would be like this when I started making this movie," the director said.

Amuro’s RX-78-2 Gundam also sees more action in the reworking as it fights Zaku robots operated by Doan and a Zeon pilot--the highlight of the film.

While the anime franchise eventually moved on to new universes and timelines that put different spins on the ideas introduced through the series, Yasuhiko has since worked on several projects related to the original storyline and characters over the years.

He published "Mobile Suit Gundam: The Origin," a manga adaptation of the first TV anime series, between 2001 and 2011.

He then produced an animated series adaptation of a section from the manga that serves as the prequel to the original TV series. It aired between 2015 and 2018, with Yasuhiko working as chief director.

But he never got the chance to remake the entire first "Mobile Suit Gundam" series as anime.

"Thanks to an unexpected chance, the Doan project suddenly emerged, and I was given the opportunity to make the movie," Yasuhiko said. "Now I have nothing to regret about the first 'Gundam.'"