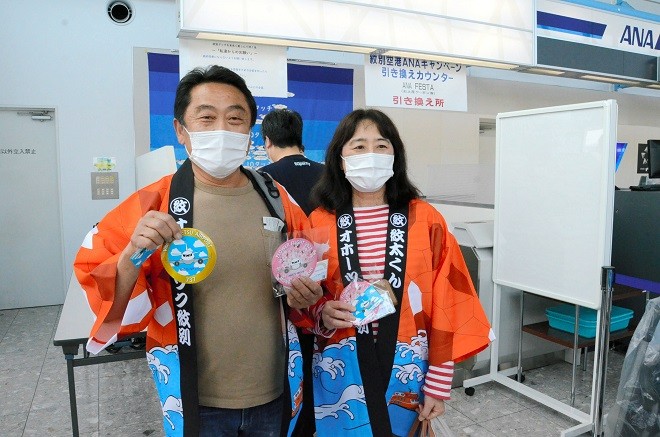 MONBETSU, Hokkaido--Air travelers from Tokyo whose sole purpose is to ratchet up air miles to stay ahead of reward programs are descending in droves at Okhotsk Monbetsu Airport here in far northern Japan--and then often taking the return trip back to Tokyo just 30 or so minutes later.

Local businesses offering snacks and souvenirs at the airport are laying out the red carpet for what are known as “touchers.”

The nickname derives from the touch-and-go style of the travelers making quick round trips between Monbetsu and Haneda Airport in the capital. On some days, they account for up to half of all passengers on the route.

“The route is a lifesaver for the region,” said Kazuhiko Nakajima, vice president of Mombetsu Tourism Promotion Corp.

The early afternoon of April 10 offered a typical insight into the welcome visitors receive. Two local people were showing off large blue hand-shaped goods at the observation deck of Monbetsu Airport. Beside them was a sign reading “Monbetsu touch” and “welcome back.”

The two were Yuki Tanaka, a director at Mombetsu Central Hotel, and Ikuko Kudo, who represents the Mombetsu tourism body. They are usually on hand to greet day-trippers to the airport.

All Nippon Airways Co. offers only one regular flight from Haneda to Monbetsu each day. On the spring route, passengers reach Monbetsu Airport at 12:30 p.m. and leave at 1:10 p.m. A one-way flight takes one hour and 45 minutes.

That gives the touchers little time to waste once they touch down.

Their first order of business is to get a certificate card stamped at the tourism corporation’s counter. Set up behind the counter is a panel displaying the names and arrival numbers of travelers on quick turnarounds.

One individual has visited more than 50 times.

Seventeen day trippers flew back to Tokyo on the lunchtime flight that day, accounting for almost half of the flight’s 36 passengers.

Flyers try to maintain the highest ranking by catching flights as efficiently as possible. They are at times likened to “monks in training” due to their stoic approach to the task.

Prior to the COVID-19 pandemic, frequent flyers based in Japan relied on international routes, primarily in Southeast Asia, to racket up air miles.

But after international travel became a no-go area, they began picking out long-distance flights within Japan, and the trip to Monbetsu from Haneda Airport offered a reasonable alternative as the flight costs 48,000 yen ($370).

Although other domestic destinations offer mileage benefits, Monbetsu proved especially popular due to the efforts of noted mambo musician Paradise Yamamoto. He authored a book on the phenomenon, which spread awareness within the tourism industry of the rich pickings to be had.

In January last year, Yamamoto got involved in exchanging information with aggressive air mile collectors through the Clubhouse voice chat app. Tanaka at Mombetsu Central Hotel heard about it and approached Yamamoto for advice.

With Yamamoto’s help, 70 touchers boarded the last Boeing 737-700 flight in June last year during the COVID-19 state of emergency.

After Nakajima learned of the development, he approached ANA about allotting more seats to touchers to increase occupancy rates and attract more visitors to this city in Japan’s northernmost main island.

As a result of those efforts, the seat occupancy ratio rose to 42.0 percent, 5 points higher than the annual average for the fiscal year that ended this past March.

Of the 28,732 passengers during that period, 6,042 were day-trippers. This translated into 30 people visiting Monbetsu daily on average simply to notch up air miles.

A spin-off from all of this is that the main hospital center in the region is now assured of having a sufficient number of doctors on hand.

Mombetsu General Hospital, which serves as the core institution for medical care in the area, was concerned that if flights from Haneda Airport were suspended or reduced, physicians may not be able to reach Hokkaido from other areas in Japan quickly.

Labeling the route a lifesaver for the region, Nakajima said: “I am really grateful to the touchers for coming here. I was astonished to learn that they account for 20 percent of passenger traffic.”

A question on the minds of many people here is whether the day-trippers actually contribute significantly to the local economy. Asked about this, most travelers said they started making overnight trips to Monbetsu after sampling the local culture on earlier visits.

“Even we feel like staying after repeatedly coming here and looking at the snow crabs and other goods on display in the souvenir shops,” said one traveler.

The local tourism industry, though, is not resting on its laurels. It realizes it needs to come up with more ideas to attract visitors to take advantage of the boom.

“Touchers will revert to taking international flights once the pandemic dies down if we’re not careful,” said Nakajima. “We need to carefully consider how to utilize this precious asset,” adding that local authorities will continue to weigh steps to keep the flight route prosperous.