IT industry group struggles with Rakuten head at the helm 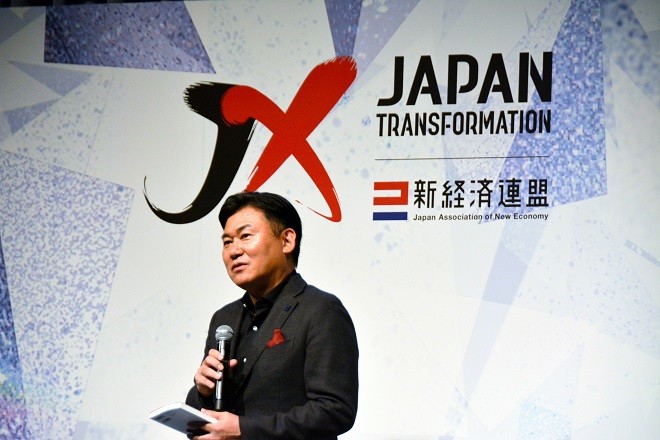 Having the powerful head of eCommerce marketplace giant Rakuten Group Inc. lead an industry group of information technology providers has been a mixed blessing.

Even with Hiroshi Mikitani, chairman and CEO of Rakuten Group, the Japan Association of New Economy (JANE) has struggled to make its presence felt.

JANE has lobbied politicians for a decade to lift existing restrictions and promote the growth of new industries.

But the domineering role by Mikitani, who is representative director of the association, has stopped some top IT companies from becoming involved with JANE.

Keidanren (Japan Business Federation) has also started lobbying for eased regulations, making it far more difficult for JANE to differentiate itself from the economic organization, which is mainly composed of heavy industry firms.

On June 1, JANE celebrated its 10th anniversary with an event attracting more than 500 officials from its member corporations.

“The group consisted only of start-up enterprises at the beginning,” recalled Mikitani at a news conference.

Mikitani prided himself on JANE’s accomplishments, saying, “Now they (politicians and bureaucrats) in the Nagatacho and Kasumigaseki districts (in Tokyo) listen carefully to our opinions.”

Founded in June 2012, JANE has often made proposals to eliminate barriers to emerging services using IT. Those efforts proved fruitful when the ban on online medicine sales was lifted and restrictions on "minpaku" private tourist inns were relaxed.

In December 2021, JANE expressed “deep concerns” about the telecommunications ministry’s plan to tighten regulations to protect the confidentiality of internet users. This led to the policy’s review.

During the COVID-19 pandemic, reforms in regulatory programs were started in connection with digitized offerings based on JANE’s suggestions.

Buoyed by the trend, the group is enhancing its activities, such as sending Mikitani to an expert panel of the Digital Agency.

Mikitani, for example, formally lambasted Keidanren, describing as “unforgivable its attempts to protect the utility industry,” in the aftermath of the 2011 accident at the Fukushima No. 1 nuclear power plant, operated by Tokyo Electric Power Co.

He then spearheaded the introduction of JANE, creating a controversy.

Feelings about the strong influence of Mikitani are mixed among its membership.

“The aura of Mikitani is too powerful and can be seen as either good or bad,” said an executive of a JANE member company. “We can hardly offer different opinions from those of Mikitani. Some firms are attempting to keep their distance to maintain their independence.”

In fact, IT giant Yahoo Japan Corp. refused to join JANE and established a group called the Information Technology Federation of Japan on its own in 2016.

Another problem involves the difficulty for JANE to stand out from its traditional counterpart.

Keidanren has lately been presenting more suggestions on regulations over digital services. As a result, proposals by JANE do not differ significantly from those of Keidanren at present.

Non-IT companies account for 40 percent of JANE's membership at present. Due to that, JANE’s composition can no longer be deemed as its unique characteristic, while the many IT firms belonging to it was initially seen as the association’s strength.

For those reasons, JANE currently receives less media coverage, whereas it drew a lot of attention when Mikitani was aggressively expressing his vision through news conferences immediately following the organization’s establishment.

To increase its presence again as a business group, JANE is expected to present its unique proposals without relying on Mikitani’s personal influence.