Toshiba to flag that activist board nominees were not approved unanimously 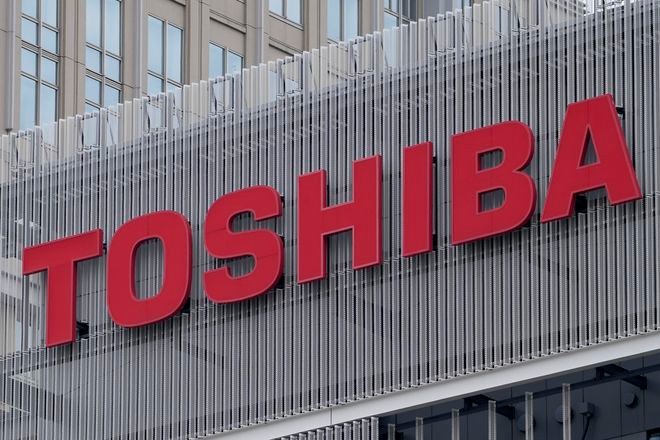 The logo of Toshiba Corp. is seen at a company's building in Kawasaki near Tokyo on Feb. 19. (AP file photo)

Toshiba Corp. plans to notify shareholders that two board director nominees from activist hedge funds were not approved unanimously by its nomination committee, people familiar with the matter said on Friday.

While divided votes on director nominations are not particularly rare, taking the step to formally disclose the matter is unusual, highlighting how contentious the issue has been for Toshiba's board.

The embattled conglomerate plans to include a note on the divided vote in a booklet for its June 28 annual shareholders' meeting, the two sources said, declining to be identified because the matter is private.

Jerry Black, an external director on the five-member nomination committee, confirmed to reporters that director Mariko Watahiki had objected to the nominations of Nabeel Bhanji, a senior portfolio manager at Elliott Management, and Eijiro Imai, managing director at Farallon Capital Management.

Black also said that Watahiki, a former high court judge, wanted to be on the record in opposing the two candidates. He declined to comment why she opposed the nominations.

One of the sources said that Watahiki had argued that the nominees' backgrounds could distort the balance on the board.

Caught up in accounting and governance crises since 2015, Toshiba has long been at loggerheads with its activist shareholder base. Some of those shareholders, including Farallon, have called for the conglomerate to be taken private - arguing it is the best route to maximising shareholder value and resolving its governance issues.

The board director nominations are among signs that Toshiba, which has been exploring its strategic options after shareholders voted down a restructuring plan, has become more receptive to the idea of a take-private deal.

Toshiba said on Thursday it had received eight initial proposals to take it private as well as two proposals for capital alliances that would see it remain listed.

Bringing activist shareholders onto a board is relatively rare in Japan, though there have been a few cases including Olympus Corp.'s 2019 decision to invite a ValueAct Capital partner onto its board.

In addition to the nominations of Bhanji and Imai, Toshiba has also nominated Akihiro Watanabe, an executive from boutique U.S. investment bank Houlihan Lokey, as chairman of its board.

Toshiba's board has eight members but the company plans to increase that to 13.