Horie becomes oldest to sail nonstop solo across the Pacific 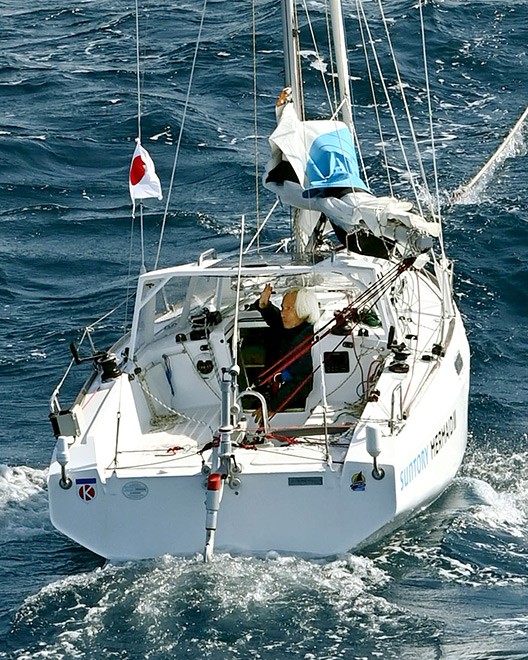 Kenichi Horie waves to a media helicopter on June 4 after crossing the finish line in the Kii Channel, marking his safe return to Japan after a 69-day solo nonstop voyage from San Francisco. (Nobuhiro Shirai)

Octogenarian adventurer Kenichi Horie returned to Japan early June 4, making him the world’s oldest person to complete a solo, nonstop 8,500-kilometer voyage across the Pacific Ocean in a yacht.

Horie, 83, crossed an imaginary finish line in the Kii Channel connecting lighthouses located at Kii-Hinomisaki in Wakayama Prefecture and Ishima in Tokushima Prefecture on the island of Shikoku at 2:39 a.m., according to his support staff.

The yacht was towed to Horie’s home port of Shin Nishinomiya Yacht Harbor. He plans to leave the yacht on June 5 after completing quarantine procedures and take part in an event to welcome him home.

In 1962, Horie became the youngest person to complete a solo voyage in a small yacht, Mermaid, from Nishinomiya Port in Hyogo Prefecture to San Francisco, attracting attention both in Japan and the United States.

His book on the trip, “Taiheiyo Hitoribocchi” (Alone Across the Pacific), became a best-seller.

He also completed a nonstop westbound solo voyage around the world between 1973 and 1974.