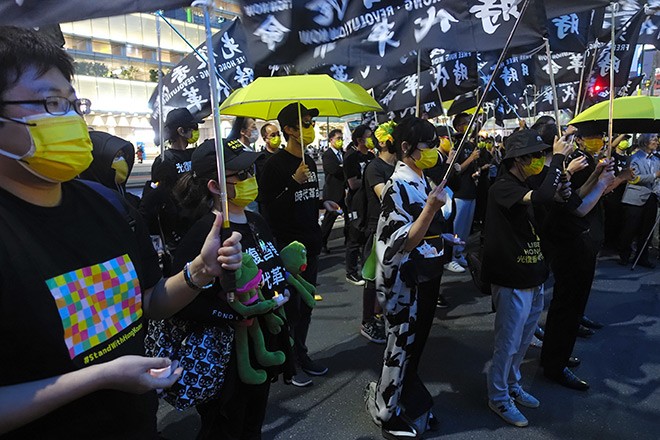 Participants pay tribute to the victims of China’s Tiananmen Square crackdown in a gathering held in front of Tokyo’s Shinjuku Station on June 4, the 33rd anniversary of the incident. (Yusaku Yamane)

Chinese exiles addressed a protest rally held in central Tokyo on June 4 to mark the 33rd anniversary of Beijing’s military crackdown on the pro-democracy movement in Tiananmen Square that left hundreds, perhaps thousands, of students dead.

The activists addressed the crowd in front of Shinjuku Station, a major rail hub, either in person or via video messages.

Zhou Fengsuo, one of 21 student leaders named in a wanted list posted by Chinese authorities soon after the massacre, spoke from the United States by video.

Zhou, 54, said he joined the movement as a college student in the belief that democracy is a universally shared ideal of humankind, adding that he and his compatriots were desperate to achieve that dream in 1989 when China brought in tanks and soldiers to suppress the demonstration.

Zhou noted that the burning desire for democracy was also embraced by many Chinese back then, which he said was unprecedented in the history of his country.

Chen Pokong, who was detained after the crackdown, addressed the crowd after flying to Japan from the United States where he now resides.

Chen, 58, warned that oppression in the Xinjiang Uighur Autonomous Region, along with Tibet and Hong Kong, as well as the “lockdown” in Shanghai under China’s zero COVID-19 policy, represented an extension of the authoritarian approach the Chinese Communist Party takes to any challenge to its decades-long rule.

A young Chinese man who took part in the gathering said it is important to continue to hold commemorative events overseas as such rallies are now banned under a draconian national security law enforced in Hong Kong.

The man, who is originally from Hong Kong, now lives in Tokyo.

After the assembly, the participants paid tribute to the victims of the crackdown by holding electric candles.