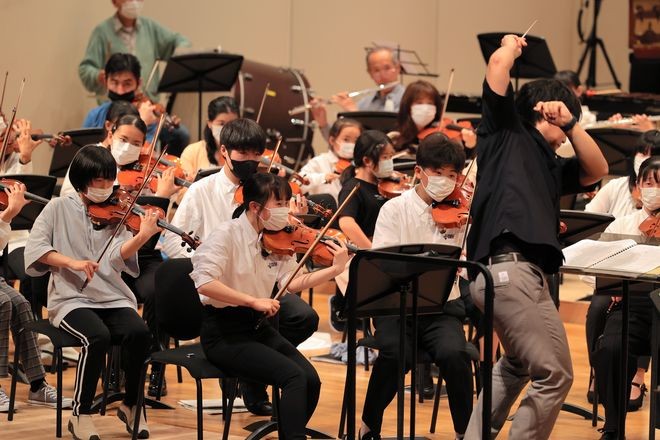 Members of the Soma Children's Orchestra and Chorus perform during a rehearsal in Soma, Fukushima Prefecture. (Tsutomu Ishiai)

It marks the first time in Japan for a municipality to work with a professional orchestra to introduce El Sistema, officials said.

Founded in Venezuela, the music education program aims to provide all children with musical instruments and an education.

The collaboration started on May 18 when Friends of El Sistema Japan, a general incorporated association that has been working in areas hit hard by the 2011 Great East Japan Earthquake and tsunami since 2012, signed a partnership deal with the city government.

"As educational disparities are widening, I thought it was important to provide opportunities for everyone to be casually exposed to music," said Keiko Usami, 48, an official of the division for creative reform efforts.

Friends of El Sistema Japan will provide violins collected through donations and other means to elementary school students of the city-run Shonai Sakura Gakuen school, which is set to open in April 2023 after the integration of three elementary schools and two junior high schools.

Members of the Japan Century Symphony Orchestra will teach the children.

During its trial period in the academic year that started in April this year, sessions will be offered on a trial basis at the elementary schools in July.

The program offers free lessons as part of after-school community activities beginning in September. The hope is to organize a presentation event during a city-hosted music festival in February 2023.

El Sistema-inspired youth orchestras are operating in more than 150 locations.

In an interview conducted in 2008 when he came to Japan, Abreu said playing music was a birthright and that music could help people build fences to keep them away from drugs in society.

It has attracted worldwide attention as an education program where participants can learn cooperative and social skills through playing in an orchestra, with the program now practiced in at least 70 countries and regions.

Norichika Iimori serves as principal conductor for the 50-member orchestra.

Composer Joe Hisaishi, known for scores for "Nausicaa of the Valley of the Wind" and other animated films directed by Hayao Miyazaki, has acted as the principal guest conductor since 2021.

Toyonaka's population in the southern part of the city has halved after peaking in 1970, as families with small children moved out of the area, the number of children has decreased, leading to school integrations.

A survey conducted by the city government showed about 40 percent of the younger generation (aged between 18 and 39) in the southern area said they want to keep living in their communities, while about 60 percent of all city residents said so.

As one of the city officials who have been working to revitalize the southern part, Usami took note of El Sistema.

"I felt the program would help us reinvigorate the southern part of the city," she said.

The amateur viola player met with Kikugawa two years ago to explore possibilities.

"With fewer children, sometimes there are not enough players to perform music at each school," said Kikugawa, who played the saxophone as a member of a senior high school brass band club.

"There are also calls for changes to improve the working conditions of teachers who shoulder the burden of supervising extracurricular club activities," he said. "I think it will be an attempt to shift after-school club activities from schools to local organizations."

A key issue is securing a budget.

The city government is considering using the hometown tax donation program, under which companies operating outside Toyonaka can contribute to this particular project and receive tax deductions.

Gratuities for performers coaching young players will be covered by subsidies the Agency for Cultural Affairs provides to the Japan Century Symphony Orchestra.

The officials also intend to call on students at Osaka College of Music in the city to work as volunteer coaches.

In Soma, where Friends of the El Sistema Japan set a precedent for its work, the association hosted concerts on May 7 and 8 to celebrate the 10th anniversary of its founding.

"We regularly play music as we pay attention to breathing in unison and listening to the sounds of different instruments," said Hokuto Nakagawa, 14, who played the violin and served as conductor for a piece during the first half of the concerts. "We want to put a smile on the faces of people in Soma with our performances."

"In Toyonaka, I hope we can start with a string band and hopefully spend five years or so developing an orchestra," Kikugawa said. "Someday, I want to create an opportunity to foster exchanges with children in the Tohoku region."