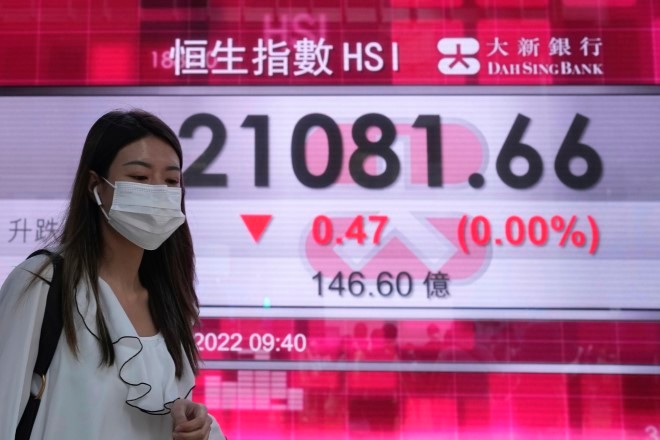 A woman wearing a face mask walks past an electronic board showing the Hong Kong share index in Hong Kong, June 6, 2022. (AP Photo)

BEIJING--Major Asian stock markets advanced Monday after Wall Street declined and a survey showed the downturn in Chinese service activity eased in May as anti-virus controls on Shanghai and other major cities were lifted.

On Wall Street, the benchmark S&P 500 index lost 1.6 percent on Friday amid concern about higher interest rates and a possible economic downturn and job losses.

A survey showed activity in Chinese retailing and other service industries shrank in May but at a slower rate than the previous month. The ruling Communist Party is allowing stores, factories and other businesses in Shanghai to reopen after a two-month shutdown to fight virus outbreaks and restrictions in the capital, Beijing, also are easing.

“Some pockets of optimism may come from further easing of virus restrictions in Beijing,” said Yeap Jun Rong of IG in a report.

The Shanghai Composite Index rose 0.6 percent to 3,215.45 after the business news magazine Caixin said its monthly purchasing managers’ index for services rose to 41.4 from April’s 36.2 on a 100-point scale on which numbers below 50 show activity contracting.

Sydney’s S&P-ASX 200 shed 0.4 percent to 7,210.90 while New Zealand markets were closed for a holiday. Singapore and Jakarta declined.

Investors are uneasy about the possibility Federal Reserve interest rates aimed at cooling inflation that is running at a four-decade high might tip the U.S. economy into a recession.

The same government report showed wages were slightly lower than forecast in May, which might reduce future pressure for prices to rise. That would reduce pressure on the Fed for more rate hikes.

More than four out of five stocks in the S&P 500 fell. The biggest declines were in tech stocks.

Tesla tumbled 9.2 percent after U.S. safety regulators said more than 750 owners have complained about cars suddenly stopping on roadways for no apparent reason while operating on their partially automated driving systems.