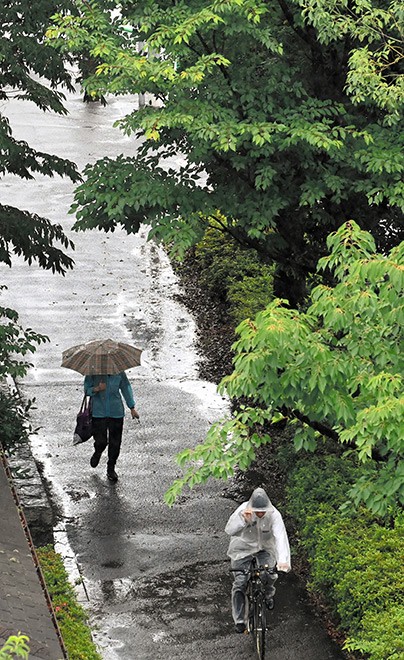 People brave the rain in the Hikarigaoka district in Tokyo’s Nerima Ward on June 6. (Kazuyoshi Sako)

Amid heavy showers, the Japan Meteorological Agency announced on June 6 that the Kanto-Koshin region appears to have entered rainy season that day.

This year, the start of rainy season in the region arrived eight days earlier than last year and one day earlier than average.

The agency forecasts that a high-pressure zone above eastern Japan is likely to bring humid air to the region in the coming days.

The humid air will bring cloudy or rainy days in the region for many of the next seven days, the agency said.

It also said that a cold air mass is moving southward, making it more likely that the atmosphere will become unstable.

In comparison, the western part of Japan, including other areas of the Kyushu region and the Chugoku region, haven’t seen the start of rainy season yet, as a seasonal rain front isn’t moving northward in that part of the country.

The Kanto-Koshin region entered rainy season earlier than areas in western Japan in 2017 and 2019 as well.