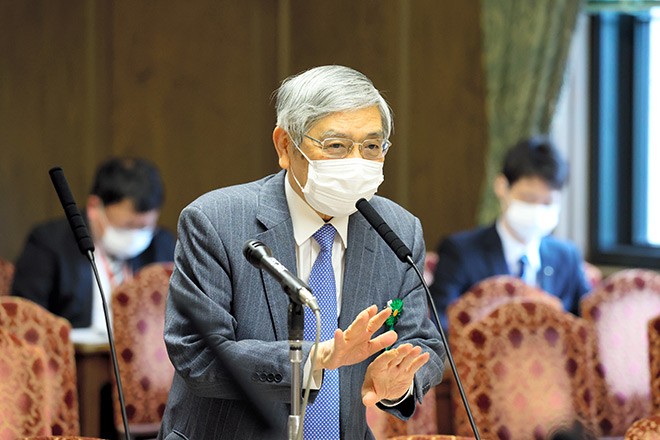 Bank of Japan Governor Haruhiko Kuroda addresses criticism over his comment that Japanese households are more tolerant of price rises at a meeting of the Upper House Finance Committee on June 7. (Koichi Ueda)

Despite coming under public criticism, Bank of Japan Governor Haruhiko Kuroda stood by his assertion that Japanese households have increased their tolerance for rising prices.

“With regard to whether the expression ‘the tolerance level toward price rises’ was appropriate or not, I would like to accept the criticism,” Kuroda said at a meeting of the Upper House Finance Committee on June 7.

But the central bank chief refused to retract his remark.

The costs of various products, including food, have risen around the world, particularly after Russia’s invasion of Ukraine in February.

Prices in Japan have also been pushed up by the weaker yen. The BOJ’s monetary easing policies have accelerated, leading to a further depreciation of the Japanese currency.

In a speech in Tokyo on June 6, Kuroda again stressed he would continue with the monetary easing policy.

“The focus for the time being is whether we can maintain a favorable macroeconomic environment for as long as possible and achieve significant wage growth from next fiscal year, while Japanese households are tolerant of price rises,” he said.

In that speech, Kuroda referred to polls conducted by Tsutomu Watanabe, professor of economics at the University of Tokyo, on household finances in five countries.

One question in the polls taken in August last year and in April this year asked the respondents what they would do if their favorite stores increased prices of their favorite products by 10 percent.

Kuroda noted that while more than half of the Japanese respondents said they would switch to other stores in August last year, significantly fewer said the same thing in the April poll.

“The level of tolerance toward price rises is increasing among Japanese households,” he said.

He said the reason for the heightened tolerance was that Japanese have accumulated savings during the COVID-19 pandemic, although he added that it was a hypothetical view.

The comment sparked a huge backlash on social media.

The consumer price index reached the 2-percent range in April for the first time since March 2015.

By contrast, inflation-adjusted real wage growth in March was up by only 0.6 percent year on year.

Kuroda said in his speech that it is important for wage growth to continue.

The issue of rising prices was raised at a meeting of the Upper House Budget Committee on June 3.

Shinkun Haku, a lawmaker of the main opposition Constitutional Democratic Party of Japan, asked Kuroda if he was feeling the pinch of higher prices.

Kuroda responded that he hasn’t really felt the impact when he shops.

“It’s generally my wife who shops at supermarkets, although I have done that,” he said.

But he added: “As prices of things that people frequently buy, including petrol and food products, are rising, many households are feeling the impact. This could negatively affect consumer sentiment, so I would like to carefully observe whether it does.”

To Kuroda’s replies, Haku said, “Please ask your wife how she feels about the price rises.”