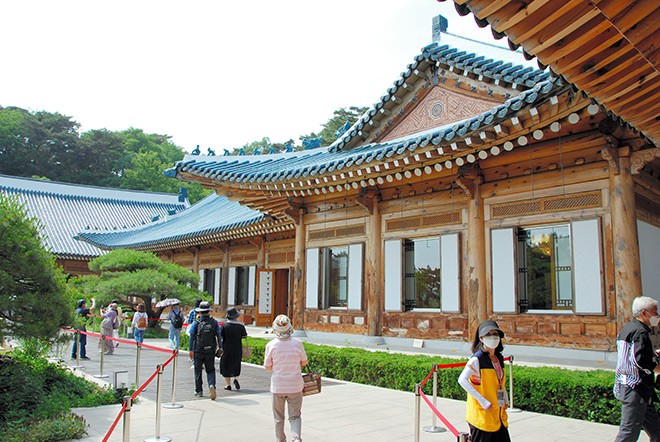 The South Korean president’s official residence is located on the premises of the Blue House in Seoul. (Kiyohide Inada)

SEOUL--The Blue House, for decades a symbol of power in South Korea, is now the country’s latest tourist hot spot after new President Yoon Suk-yeol made good on a campaign pledge to open the once heavily fortified retreat to the public.

Hundreds of thousands of people have flocked to the ornate buildings and extensive grounds in central Seoul since the site opened in May.

Public viewing of the Blue House, called Cheong Wa Dae in Korean, stemmed from Yoon’s decision to move the functions of the presidential office to another location to make his administration more accessible.

The Blue House complex comprises the main administrative buildings, which housed the president’s office, the official residence of the country’s leader, a state guest house and other structures.

Its imposing appearance served as a symbol of the power that had governed South Korea for decades.

Concerns had been raised that the buildings kept the president isolated from the public.

After entering the front gate of the Blue House, the main office building with its blue-tiled roofs comes into view. Built in 1991, it comprises the president’s office, which boasts the desk used by past leaders, giving camera-toting visitors a first-hand glimpse of the awesome power that was once exercised there.

“I thought it would look gorgeous when I got a glimpse of it on TV, but it actually appears much more unpretentious,” said one visitor.

The main office building has a room with photos of former first ladies and a space that was used to hold news conferences with foreign leaders.

The official residence of the president and the first family is located on a hill a short walk from the main office building.

A sign located next to the gate of the residence states that it is now open to the public, reflecting the changing times.

Visitors can enter the premises of the residence, but the building itself remains off-limits. From the outside, they can see the dressing room, bedroom, beauty parlor and kitchen, offering a glimpse into what it was like to live there.

Past Japanese prime ministers also visited the Blue House, which has witnessed a turbulent history in the Korean Peninsula’s postwar era.

It opened to the public on May 10, a day after Moon Jae-in completed his term as president and moved out. The buildings were initially closed to the public, but visitors are now gradually being allowed into some areas.

Yoon, the current president, uses a room in a defense ministry building in Seoul as his office.

Prior reservations are required to visit the Blue House. As of the end of May, about 6.59 million people had made requests for bookings, and roughly 570,000 have visited, according to government officials.