VOX POPULI: BOJ governor shows he’s out of touch with the ‘mundane world’ 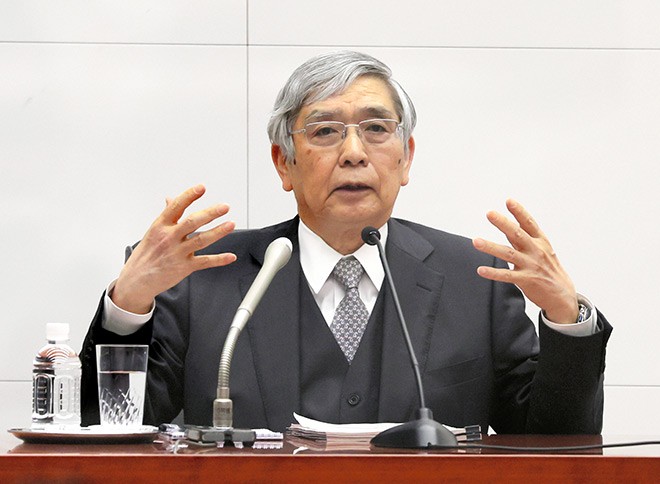 Haruhiko Kuroda, governor of the Bank of Japan, speaks at a news conference in Tokyo in December. (Pool)

Thales of Miletus, regarded as the father of philosophy in ancient Greece, was an accomplished astronomer known for accurately predicting a solar eclipse.

It is said that Thales was walking one night while gazing up at the sky and fell into a ditch.

A woman who helped him out chided him for his clumsiness regarding the most mundane matters despite his expert knowledge.

“You love studying distant stars, yet you don’t even watch your step,” she said, according to the Japanese edition of a book by science writer Surendra Verma.

The governor of the Bank of Japan, however, apparently lacks the worldly wisdom that should have warned him against carelessly uttering words that will rub people the wrong way.

To back his claim, he cited a poll that showed fewer respondents said they “would go to a different store” when they were asked what they would do if the price of their favorite product increased 10 percent at their go-to store.

But in plain Japanese, it means people have become “resigned to” rising prices rather than “more tolerant of” them.

Kuroda came unexpectedly under fire and was forced to explain himself.

In the past, Kuroda worked on his language skills to be expressive.

In a gesture of his determination, he quoted a line from the story of Peter Pan: “The moment you doubt whether you can fly, you cease forever to be able to do it.”

Kuroda may have become more harried because his monetary easing policy has failed to live up to his expectations and critics are talking about “bad” price increases.

Whatever the BOJ says or does as the guardian of price stability will continue to be scrutinized.

It is unfortunate for everyone when the institution’s head is considered “out of touch with the mundane world.”