Japan’s economy contracts, but at smaller rate than thought 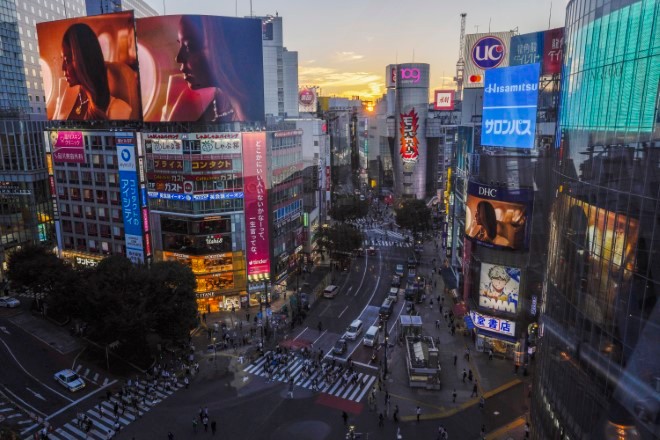 People walk across the famed Shibuya scramble crossing as the sun sets behind a skyscraper Oct. 11, 2021, in Tokyo. (AP Photo)

The Japanese economy contracted in the first quarter, but at a slower pace than earlier estimated, the government said Wednesday.

The world’s third-largest economy contracted at an annual rate of 0.5 percent, according to Cabinet Office data. That was smaller than the 1.0 percent contraction in the preliminary estimate for Japan’s real gross domestic product, or GDP, released in May.

The annual rate shows how the economy would have grown if the quarterly rate were to continue for a year. Japan’s economy contracted 0.1 percent in January-March from the previous quarter, better than the 0.2 percent quarter-on-quarter contraction in the preliminary data.

Consumer spending and other private demand was stronger than previously thought.

The upward revision was a pleasant surprise for analysts.

“Looking ahead, we expect GDP to rebound in 2Q mainly due to better private consumption, yet higher inflation on commodities will likely limit the gains in real terms,” Robert Carnell, regional head of research Asia-Pacific at ING, said in a report.

The expected reopening of the country to tourists as limits imposed to curb COVID-19 infections are lifted, should also boost growth.

On the negative side, Japan, which imports almost all its oil, much of its food and various products, has been slammed by rising prices for energy and other commodities, partly because of the war in Ukraine.

Japan has for years been fending off deflation, or a spiraling down of prices. Low wage growth and an aging and shrinking population have slowed economic activity and discouraged corporate investment.

Bank of Japan Gov. Haruhiko Kuroda apologized Tuesday for recently referring to a “tolerance for higher prices” among Japanese people, a comment interpreted as welcoming higher prices. Kuroda was grilled in parliament, where he told legislators his comment was inappropriate.

Kuroda has championed a policy aimed at boosting near-zero inflation to around 2 percent, but progress was slow until global prices for oil and other commodities surged in recent months.

Some analysts say Japan has gradually lost its competitive edge because it hasn’t done enough to nurture innovation and free up new sources of growth bridled by old-time bureaucracies.

One source of worry is the diving value of the yen, now trading at a 20-year low of about 133 yen to the U.S. dollar.

Although a weak currency is a boon for Japanese exporters, boosting the value of overseas earnings, analysts say the weak yen also reflects a weak economy. Rising interest rates in the U.S. and other countries compared to Japan, where interest rates are at near zero, will likely keep the yen weak for some time.

Prime Minister Fumio Kishida is pushing what he calls “new capitalism.” He announced an outline of his strategy this week, aimed at jump-starting growth by pushing digitization, defense spending, start-up ventures and sustainable energy. He has also invited investments, declaring in English, “Invest in Kishida.”

Former Prime Minister Shinzo Abe, Japan’s longest serving leader, pushed “Abenomics,” focused on super-easy lending that was meant to spark inflation and therefore promote growth. Some critics say Abenomics failed to build a strong economy and its pitfalls are part of the reason now behind the weak yen.