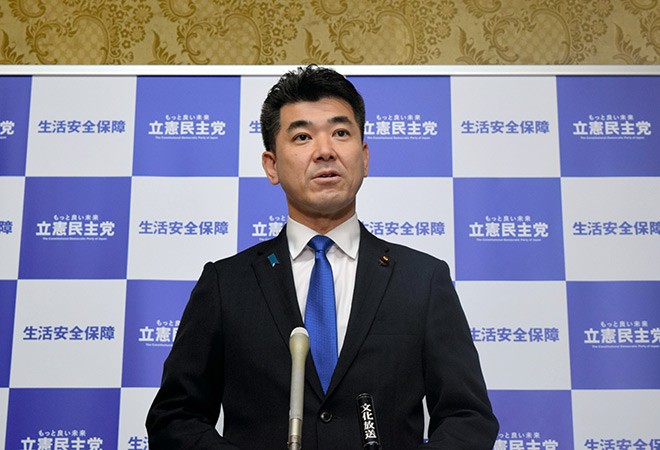 Kenta Izumi, head of the Constitutional Democratic Party of Japan, says the party plans to submit a no-confidence motion against the Kishida administration on June 8. (Tamiyuki Kihara)

The main opposition Constitutional Democratic Party of Japan submitted a no-confidence motion against the Kishida administration in the Lower House on June 8, but the move was expected to go nowhere.

A vote on the motion is expected on June 9.

CDP leader Kenta Izumi said earlier on June 8 that the supplementary budget passed by the Diet at the end of May has failed to help the public deal with escalating price increases.

He said the Kishida administration has not fulfilled its obligations to the public.

“The government has no strategy and cannot protect people’s lives,” Izumi said.

He also said the Upper House election this summer will be “a runoff between the CDP, with its concrete plans to tackle price rises, and the ruling Liberal Democratic Party, with no concrete plans.”

Opinion polls have shown that a majority of voters are unsatisfied with the government’s measures so far to fight inflation. But the polls also show solid overall support for the Cabinet of Prime Minister Fumio Kishida.

In addition, the CDP appears to be losing ground to another opposition party, Nippon Ishin (Japan Innovation Party).

The CDP called on other opposition parties to join its no-confidence move, but the response underscored the split within the opposition camp.

Both the Japanese Communist Party and the Social Democratic Party expressed a willingness to vote in favor of the no-confidence motion.

But Nippon Ishin and the Democratic Party for the People showed an unwillingness to go along with the CDP plan.

Even before the vote on the motion, a senior CDP official said: “Other parties have no part in it. We are showing our stance as the leading opposition party.”

The CDP also submitted a no-confidence motion against Lower House Speaker Hiroyuki Hosoda on June 8 over allegations of sexual harassment and his negative opinion toward reducing the vote-value disparity.