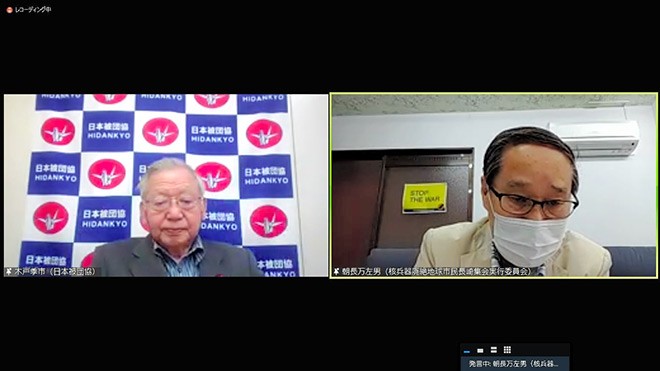 Atomic bomb survivors Sueichi Kido, left, and Masao Tomonaga attend an online conference before the first meeting of state parties for the Treaty on the Prohibition of Nuclear Weapons. (Tabito Fukutomi)

More than 50 people from Japan, including hibakusha and NGO representatives, will attend an upcoming meeting in Vienna regarding a treaty on the banning of nuclear weapons hosted by the United Nations.

“I would like to call attention to the inhumanity of nuclear weapons,” said Sueichi Kido, 82, who survived the atomic bombing in Nagasaki and serves as secretary-general of Nihon Hidankyo, a nationwide organization for atomic bombing survivors, said at an online news conference on June 7.

Participants said they will advocate for the need to abolish nuclear weapons as soon as possible during their visit amid a growing threat of nuclear weapons after Russia’s invasion of Ukraine.

The first meeting of the state parties for the U.N. Treaty on the Prohibition of Nuclear Weapons (TPNW) will be held in Vienna from June 21-23.

Japan has not signed the treaty due to its security alliance with the United States, which offers Japan protection under its nuclear umbrella.

“Our voices are needed to persuade the nuclear-weapon states and countries under their nuclear umbrella to join the pact,” said Masao Tomonaga, 79, a survivor of the atomic bombing in Nagasaki.

Countries such as Japan can take part in the meeting as an observer, but the Japanese government does not plan to attend.

“I’m disappointed and would like to protest,” said Masashi Ieshima, 79, who survived the atomic bombing in Hiroshima.

“We have been negotiating with the Foreign Ministry many times (to join the pact) such as collecting more than 900,000 signatures and submitting them to the ministry,” he said.

While the Japanese government will not participate, Germany and Norway, both also under the U.S. nuclear umbrella and members of NATO, plan to attend.

“Nuclear-weapon states have pledged to work toward a world without nuclear weapons, so we’d like to ask how this can be achieved,” Tomonaga said.

Whether the survivors will be allowed to speak at the conference is unclear.

The TPNW bans the development, testing, possession and use of nuclear weapons. The treaty took effect on January 2021, but the United States, China and other nuclear weapon powers have refused to ratify it.

Akira Kawasaki, a member of the International Campaign to Abolish Nuclear Weapons (ICAN), said Russia’s invasion of Ukraine “heightened the sense of urgency that something must be done about the nuclear issue.”

Kawasaki added, “We want to convey the longing of the Japanese people to ban nuclear weapons.”

The Austrian government will hold a conference on the Humanitarian Impact of Nuclear Weapons on June 20. The Japanese government has decided to send representatives, including Kido and Tomonaga, to the meeting.

Kido said he wants to describe what he witnessed the day the atomic bomb was dropped.