Skylark to pay over 1.5 billion yen to short-changed workers 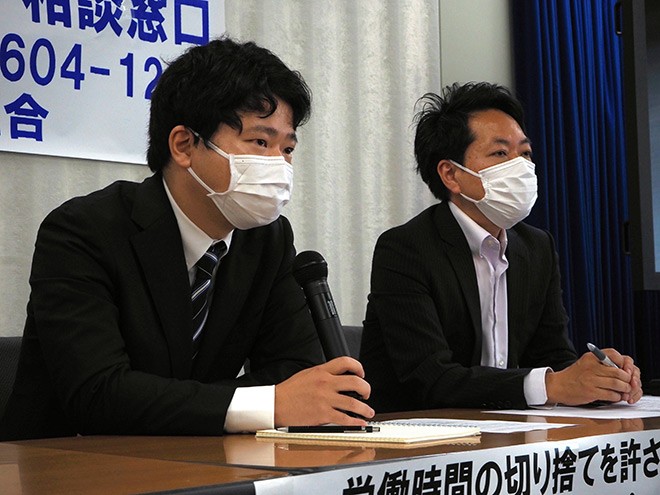 Hirofumi Suga, left, a part-time worker at a family restaurant outlet run by Skylark Group in Tokyo, during a news conference on June 8 (Hiroki Hashimoto)

Skylark Group said it will pay part-time workers to the minute worked rather than rounding down the time to five-minute increments starting from July 1, in addition to compensating those short-changed in the past.

Currently, the company, which operates about 3,100 family restaurants nationwide, including Gusto and Bamiyan, rounds down such workers’ working time that is less than five minutes.

The company also said it will pay about 90,000 such workers for their rounded-down and unpaid work times in the past two years.

Hirofumi Suga, 26, who works part time at an outlet of the company in Tokyo, said at a news conference on June 8, “One minute, or one second. It is the same that I get paid for breaking my back.”

He has been tasked with mainly delivering door to door, and said, “I questioned every time the company’s practice of rounding down the time less than five minutes, and my frustration built up.”

He joined the National Union of General Workers Tokyo Tobu and has urged that the company pay for the minutes worked, rather than rounding down the time.

Suga said he will receive a total of 64,000 yen for the past two years of work.

The company said in writing, “We do not have an understanding that managing attendance by rounding it to five minutes is itself illegal.”

The decision to change to a minute basis was based on the “purpose of maintaining a trustful relationship” with part-timers and others, it said.

Other family restaurant operators pay their employees for every minute worked.

Coco's Japan Co. used to round down the workers’ time to 15 minutes. But starting from last fall, it changed to counting by minutes.

Denny’s Japan Co. and Royal Host Co. have counted the workers’ time by minutes for more than 10 years, the companies said.

A representative of the labor ministry said, “Under the Labor Standards Law, it is not acceptable to round off fractions of time. If (a company) does not pay for the time, it is possibly considered illegal.”