Tailor remakes kimono left by the deceased into family keepsakes 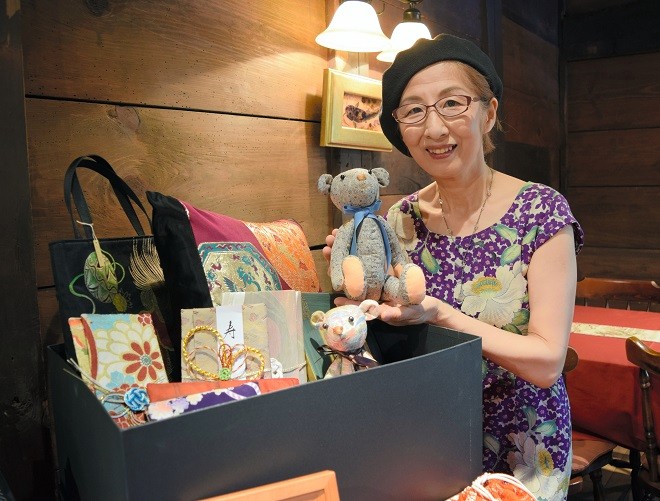 IZUMO, Shimane Prefecture--For those memory-filled kimono that the deceased leave behind, a clothing designer here is offering to remake them into bags, stuffed toys and other daily accessories.

Such keepsakes help families remember their loved ones in the course of their daily lives.

Artisans whose workload has decreased due to the COVID-19 pandemic and other reasons are also hopeful that this effort can help their techniques be carried on for future generations.

Clothing designer Sanae Abe, 63, manages Omoideya, a cafe remodeled from a traditional "kura" warehouse of a long-established family. She started the business on her own in 2001 before converting it into a workers' coop.

One of its main operations is to remake old kimono sitting in the closet into clothing to promote the charms of the traditional attire.

Abe carefully listens to her customers to gain inspiration for her creations.

The designer has given nearly 4,000 pieces of kimono a makeover in the past 20 years.

She also organizes fashion shows to showcase her works across the country.

Customers can select which items they want the kimono to be remade into depending on their budget.

The remade items are packed into a box to be given to those close to the deceased as keepsakes before a memorial service commemorating the 49th day or the first death anniversary.

Abe came up with the idea after she heard many people say that they didn't know what to do with so many kimono given by their parents and in-laws and that it was a heavy burden to inherit them.

The designer initially conceived the idea as part of a business to sort through the personal effects of the deceased.

She was hesitant at first because she was unfamiliar with the business field. But Abe was encouraged when she sought advice from an acquaintance at a funeral company and received a positive response.

Sewing is carried out by first-rate specialists in tailoring traditional and Western clothes.

Each is a skilled artisan working in the prefecture who puts quality first.

But their workload has drastically declined because ready-to-wear and rental kimono are widely worn nowadays, not to mention the fact that the numbers of weddings and Coming of Age Day ceremonies have also decreased due to the novel coronavirus pandemic.

But because the Omoide Box service deals with a variety of items, they can make the most of their expertise and pass on their traditional techniques to future generations, Abe said.

"Kimono is best when it is worn, but if that's not possible, I want to hand over the baton to the next generation in a different way," she added. "Reviving personal items cherished by the deceased can help you find a sense of closure and sort out your feelings. I'm just giving help."

The finished items will be delivered in one month at the earliest.

Orders are accepted from 10 a.m. to 5 p.m. Omoideya is closed on Tuesdays and Wednesdays.