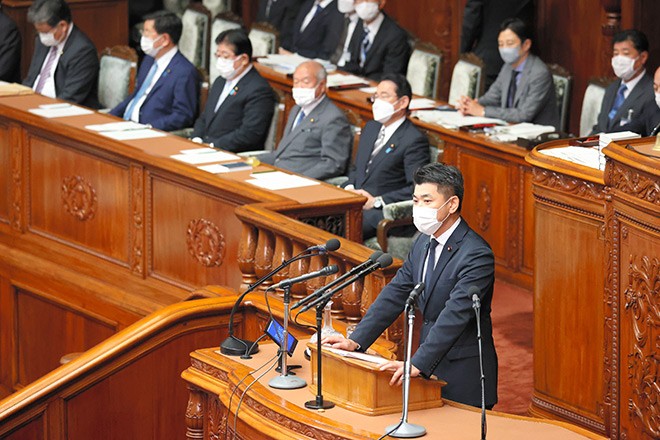 Kenta Izumi, head of the opposition Constitutional Democratic Party of Japan, explains the no-confidence motion his party submitted against the Kishida Cabinet at a Lower House plenary session on June 9. (Koichi Ueda)

The Lower House on June 9 overwhelmingly defeated no-confidence motions submitted by the opposition Constitutional Democratic Party of Japan against both the Cabinet of Prime Minister Fumio Kishida and Lower House Speaker Hiroyuki Hosoda.

In addition to the overwhelming majority enjoyed in the chamber by the ruling coalition, the opposition Nippon Ishin (Japan Innovation Party) and Democratic Party for the People also voted against the motion regarding the Kishida Cabinet.

The no-confidence motion criticized the Kishida administration for not living up to its obligations to the public by failing to deal with rising prices.

The no-confidence motion against Hosoda was submitted because the CDP felt he was not fit to serve given the allegations that he sexually harassed female reporters.

Nippon Ishin and DPP lawmakers left the plenary session before the vote on Hosoda’s motion was taken.