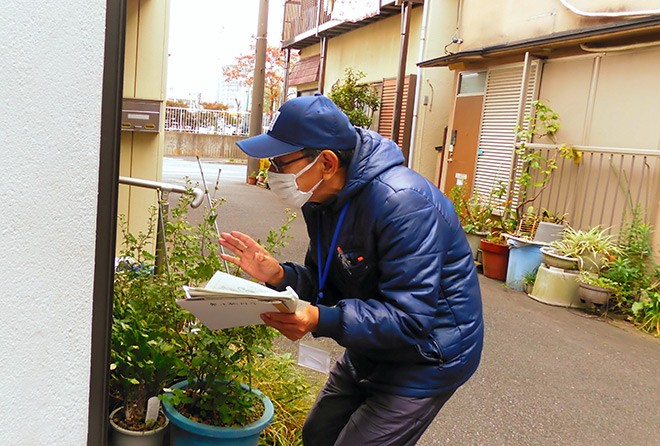 An official in Tokyo’s Edogawa Ward visits residential areas in October 2021 for a survey about “hikikomori.” (Atsushi Takahashi)

One in 76 people in Tokyo’s Edogawa Ward are “hikikomori,” or social recluses who do not go out for work or school and rarely interact with people outside their families, a survey showed.

Many of them are in their 30s to 50s, according to the ward’s survey results released on June 8.

From last July to February, ward officials mailed questionnaires to 180,000 households with residents 15 or older who were either unemployed or not receiving social welfare administrative services.

According to the responses, 7,919 people in the surveyed households fell under the ward’s definition of hikikomori. When they are added to the estimated 1,113 children in the ward who have stopped attending school, the overall hikikomori rate is around 1.3 percent.

A disease or condition requiring long-term treatment was cited as the cause of the social reclusiveness in 20 percent of the cases, according to the survey.

Job-related problems, such as not fitting in at work, caused 14 percent of the hikikomori cases while struggles and failures in job hunting were cited in 11 percent.

The Cabinet Office estimates about 1.15 million people nationwide have become hikikomori for various reasons, such as bullying and power harassment.

Prolonged social withdrawal could lead to poverty and solitary deaths.

Japan faces a growing social phenomenon called the “8050 problem,” which refers to parents in their 80s financially supporting their children in their 50s.

Edogawa Ward officials said the survey results showed that many hikikomori are in the primes of their lives and living with their spouses.