Yoon: Plans under way for Kishida talks at NATO summit 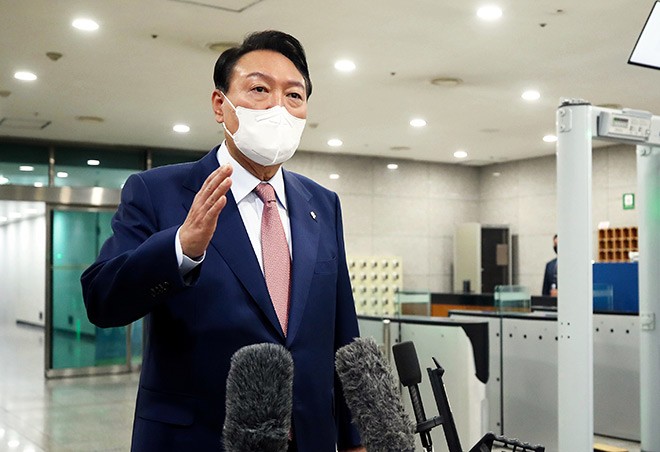 South Korean President Yoon Suk-yeol speaks to reporters at the presidential office in Seoul on June 9. (Provided by Dong-A Ilbo)

New South Korean President Yoon Suk-yeol expressed his intention to meet with Prime Minister Fumio Kishida on the sidelines of the NATO summit scheduled for June 29 and 30.

Yoon told reporters on June 9 that preparations are being made for possible talks with Kishida at that meeting in Madrid.

Kishida is preparing to become the first Japanese prime minister to attend a NATO summit, while Yoon, who took office in May, has decided to attend the meeting.

Yoon also expressed hope that Seoul and Tokyo can resolve the compensation issue concerning former Korean wartime laborers and other matters that have strained bilateral relations.

“I believe we can peacefully settle the issues between South Korea and Japan through future-oriented cooperation,” Yoon said.

But he added that it is too early to confirm that talks with Kishida will be held at the NATO summit.

Although Yoon has expressed hopes of meeting with Kishida as soon as possible to improve bilateral ties, the Japanese side is reluctant to hold talks on politically sensitive issues during the NATO summit, which coincides with the Upper House election campaign period in Japan.

Unlike his predecessor, Moon Jae-in, Yoon takes a flexible stance toward long-standing issues between the two countries. His election victory raised hopes among Japanese government officials for a thaw in the icy relations with South Korea.

But soon after the inauguration of the Yoon administration, a South Korean vessel conducted a maritime survey in waters off the disputed Takeshima islets.

Japan considers the Takeshima islets as part of Shimane Prefecture, but they are also claimed by South Korea, which calls the islets Dokdo.

A senior Japanese Foreign Ministry official said the ministry was initially unfazed by the survey, believing that it would be a brief study and was based on a decision by the Moon administration.

But the survey lasted for two days, sparking a backlash, mainly from the conservative ruling Liberal Democratic Party.

Although the NATO summit could offer an opportunity for Kishida and Yoon to chat on the sidelines, a senior LDP official said such talks would be unwise since no concrete progress has been made on the bilateral issues.

(This article was written by Takuya Suzuki in Seoul and Yuichi Nobira in Tokyo.)