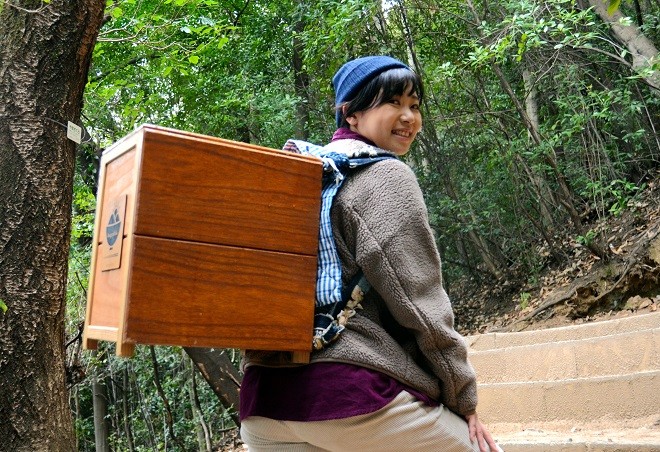 HIROSHIMA--Risa Mimura likes nothing better than to be up bright and early guiding trekkers to a secluded spot in the mountains overlooking this city when the buildings below are sparkling in the morning sun.

Mimura, 35, spent a year figuring out the most suitable hiking route on 139-meter Mount Futabayama near JR Hiroshima Station in what she refers to as the early bird Asageshiki tour to encourage visitors to stay overnight in the city.

The stunning cityscape view aside, the main attraction of the outing is the fancy breakfast packed in a large wooden box she carries on her back.

It includes local delicacies such as black sea bream from the Seto Inland Sea, dried young sardines from the Ondo Straits, specialty chicken from Hiroshima and sweet treats.

The tour proved to be an instant hit not only with Japanese but also foreign residents in Japan from the United States, India, Spain and China, among other countries.

Mimura always makes a point of stopping to display old black and white photos of Hiroshima to compare with how the cityscape looks now to remind those on the tour of the city’s grim history.

Mimura’s family runs a company that produces Kumano brushes, a traditional craft manufactured in Kumano, Hiroshima Prefecture, for more than a century.

It was while helping her family’s business as a market and product developer that she realized many people in the industry worried about finding skilled craftspeople to carry on the tradition.

With that in mind, Mimura organized an event with her peers to generate interest in the city and its culture among people of all ages and nationality, which eventually led her to come up with the unusual early morning tour.

“I want to improve the charms of Hiroshima from various angles.” Mimura said. “Once the COVID-19 pandemic is over, there will be an opportunity for people around the world to learn more about the best of Hiroshima.”

Mimura serves as head director of My Japan, an entity working to promote traditional culture and crafts to younger generations.