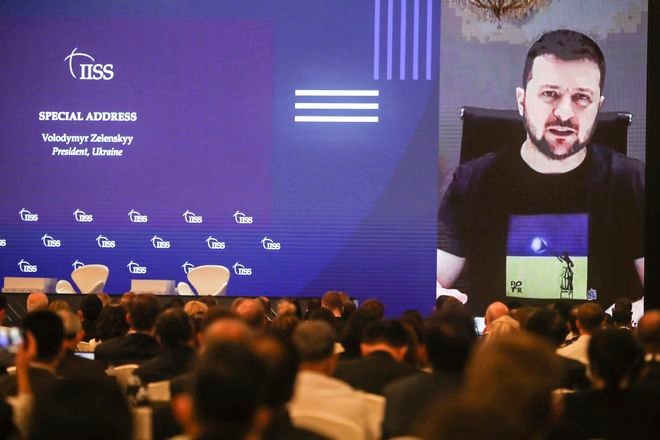 SINGAPORE--Ukrainian President Volodymyr Zelenskyy, speaking remotely at the Shangri-La Dialogue in Singapore, said the outcome of the war in his country affected not just Ukraine, but the future of international order.

His country is seeking to push the Russians out of areas it has controlled since early in the war, and is defending against ferocious Russian attacks in the country's east, particularly around the city of Sievierodonetsk.

Noting the support so far from the West and its Asian allies, Zelenskyy--addressing the event via video link from an undisclosed location in Ukraine's capital, Kyiv--said it was crucial that the nations sending aid do not let up.

"I am grateful for your support... but this support is not only for Ukraine, but for you as well," he said. "It is on the battlefields of Ukraine that the future rules of this world are being decided along with the boundaries of the possible."

He noted that Russia is blocking ports in the Black Sea and Azov Sea, keeping Ukrainian food exports from the world market. That hurts not just Ukrainians, but the entire world, he said.

"If ... due to Russian blockades we are unable to export our foodstuffs, the world will face an acute and severe food crisis and famine in many countries in Asia and Africa," he said.

Russia calls its actions in Ukraine a “special operation” that it says is not designed to occupy territory but to destroy its southern neighbor's military capabilities and capture what it regards as dangerous nationalists.

Speaking to 575 delegates from 40 countries, Zelenskyy said his military had no ambitions to move into Russian territory: "Please remember the war is being waged on our soil. People in Ukraine are dying. ... We don’t want to go to Russian soil."

“We understand it will take time, but time is what we don’t have,” she said.