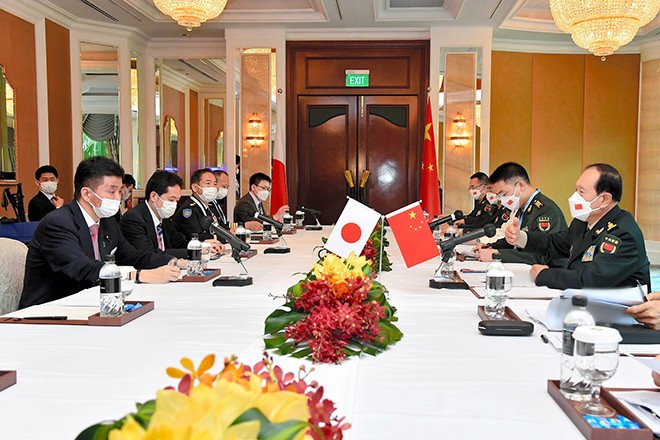 SINGAPORE--Defense Minister Nobuo Kishi said he relayed his “grave concern” to his Chinese counterpart about recent joint military exercises where Chinese and Russian bombers flew around the Japanese archipelago.

Kishi described the exercises, which took place last month, as a provocative show of force intended to intimidate Japan.

The military drills coincided with the Quad security summit, where leaders from Japan, the United States, Australia and India gathered in Tokyo on May 24.

The comments came as Kishi shared with reporters some of the contents of the hourlong talks with Wei Fenghe on June 12 after the session ended--the first time the two countries’ top defense officials have met in person since December 2019.

Despite the tensions, the ministers also managed to find some common ground.

“Wei and I agreed that the defense authorities between our two countries should enhance dialogues and exchanges,” Kishi said.

Kishi was visiting Singapore to attend the Asia Security Summit, known as the Shangri-La Dialogue, organized by Britain’s International Institute for Strategic Studies and supported by other organizations, including The Asahi Shimbun.

Their talks were held on the sidelines of the multilateral conference.

According to the Defense Ministry, Kishi also said during the Japan-China meeting that Russia’s invasion of Ukraine is “totally unacceptable,” as it amounts to unilaterally changing the status quo by use of military force and it erodes the foundation of the international order--not just in Europe but also in Asia.

He urged China to “play a responsible role,” considering that the country is a permanent member of the U.N. Security Council.

Beijing has shied away from condemning Russia’s aggression.

Kishi also called for China to show “strong restraint” in the regional security arena, accusing Beijing of attempting to change the present situation in the East China Sea, including waters near the Senkaku Islands, on the back of its military might. The uninhabited islands, controlled by Japan, are claimed by China.

He also asserted that peace and stability in the Taiwan Strait is “extremely important for not only Japan but also for the global community.”

On Beijing’s activities in the South China Sea, he said China should sincerely listen to the concerns voiced by the international community.