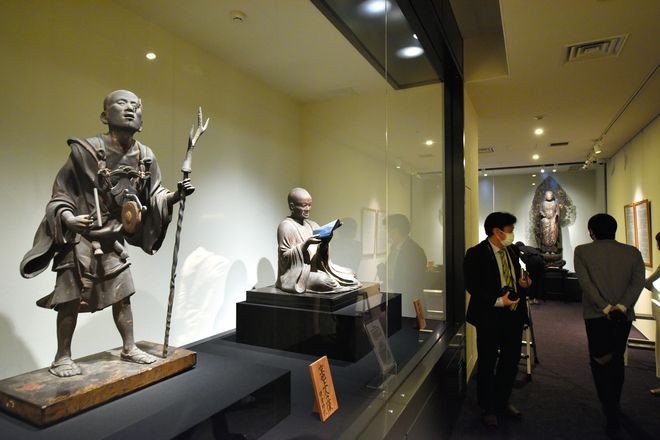 A statue of a Standing Saint Kuya, left, and many other important cultural properties are on display at Rokuharamitsuji temple's new storage facility, Reiwakan, in Kyoto's Higashiyama Ward on May 20. (Shinichi Iizuka)

KYOTO--Rokuharamitsuji temple in the city's Higashiyama Ward has opened its new Reiwakan storage facility to the public, showcasing 14 Buddhist statues designated by the government as important cultural properties and other sculptures.

Founded in the 10th century by Buddhist Saint Kuya, who spread the Amida faith, the temple is renowned for housing a famed statue of a Standing Saint Kuya, which is an important cultural property, with six small statues of Amida Buddha emerging from its mouth.

The two-story reinforced-concrete storage facility with a total floor space of about 210 square meters was built to commemorate the 1,050th anniversary of the death of the priest this year. It stands next to the existing Homotsukan storage house, which has fallen into disrepair.

The standing statue was crafted by Kosho, a son of master Buddhist sculptor Unkei, in the 13th century of the Kamakura Period (1185-1333).

It is said that the small statues coming out of his mouth represent each character of the sutra “Namu Amida Butsu” (I take refuge in Amida Buddha) transforming into an Amida Buddha.

"In one glance, I think you can understand how Saint Kuya, who was born into a high rank, discarded everything and chanted 'Namu Amida Butsu' for the salvation of people," said chief priest Junsho Kawasaki, 67.

Also on display at the Reiwakan are realistic sculptures from the Kamakura Period, including seated statues of Unkei and warlord Taira no Kiyomori, as well as a Standing Jizo Bosatsu by Jocho, a master sculptor of the Heian Period (794-1185).