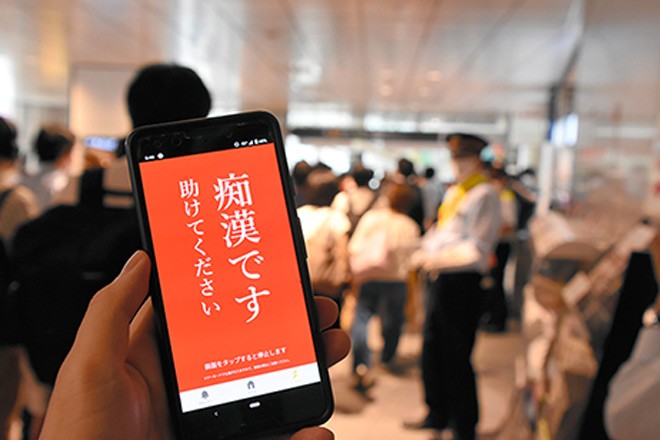 A teenage girl raised her hand, clutching a smartphone, over the heads of passengers around her on a train in Tokyo in mid-April.

The text on her phone’s screen read, “A groping incident is occurring here. Please help me.”

After seeing that a man near her was noticing the smartphone’s message, she used the audio function of the app to have her phone state the words, “Please stop.”

This caught the attention of another passenger, who asked the man who was groping the girl, “What are you doing?”

The groper got off the train at a nearby station, along with the girl and other passengers who assisted her.

The groper was taken to police officers, who had rushed to the station after the girl had called the emergency 110 number.

As the COVID-19 pandemic is subsiding and more people are returning to offices and schools, an increasing number of women are sharing on social media their experiences of dealing with "chikan" (gropers or groping) on trains.

Many have also turned to smartphone apps to help them.

DIGI POLICE TO THE RESCUE

The teenage girl had used a crime-prevention smartphone app called Digi Police, according to the Metropolitan Police Department.

The app shows text on the smartphone’s screen that communicates to those nearby that they are dealing with a groping situation.

It can also emit a call for help.

The app was downloaded around 470,000 times by the end of March this year after the Metropolitan Police Department released it in 2016.

The Metropolitan Police Department is calling for people to actively use it, in its Chikan Eradication Campaign, which began on June 1, along with rail operators.

Victims of chikan often find it hard to seek help, which was the impetus for developing the app.

The Metropolitan Police Department believes it is important to create tools or systems to make it easier to report chikan incidents.

Mariya Okamoto, 18, who takes part in the Japan Youth Conference’s #NoMoreChikan campaign calling for the government to tackle the issue, once dealt with a chikan incident.

When she was in high school, a man standing next to her on a train pressed his body up against hers.

Okamoto says she didn’t know “if it was deliberate or not, so I couldn’t ask for help.”

A Fukuoka prefectural police survey of 3,000 people last year found around 90 percent of chikan victims on trains or in other places didn’t report the incident to police or train station officials.

APP WORKS AT PUSH OF A BUTTON

A startup called RadarLab created a free smartphone app called Radar-z in 2019 that makes it easier for chikan victims to seek help and make known where chikan incidents occur.

People can enter and share information, such as where chikan incidents occur and what victims are being subjected to, in real time on the app.

There are 70,000 cumulative users, with around 6,000 reports, such as cases of gropers putting their hand inside the victim’s clothing.

These reports also reveal chikan incidents often occur on train lines where there is a lengthy distance between stations, or where train doors open on the same side of the cars all the time.

The app users can also seek help from fellow users who are on the same train by pushing a button on the app.

“It’s easy to push a button, even if you can’t seek help verbally," said Remon Katayama, a public relations officer at RadarLab. "We created the app to enable users to easily see where people needing help are.”

Other people provide support in a non-digital way.

The badges have phrases such as “Chikan is a crime” printed on them.

“I want victims of chikan to communicate their suffering by using words that they find easier to say, such as 'Someone’s body is touching mine' or 'I’m in pain.' That’s the first step to protecting yourself, as well as reducing the number of future victims of chikan,” said Yayoi Matsunaga, 56, the head of the center.

(This article was written by Minami Endo and Natsuki Edogawa.)