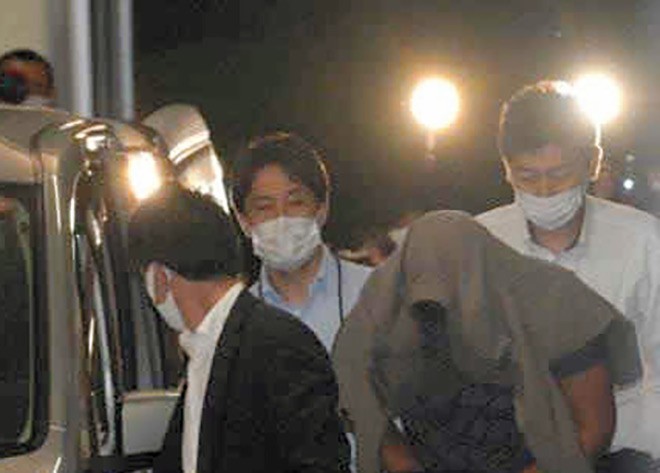 Daiki Matsue, who pulled a jacket over his head to avoid being photographed, was arrested on suspicion of fraud and is being taken to Mejiro Police Station in Tokyo’s Toshima Ward on June 13. (Soichi Tsuchidate)

Tokyo police have arrested the alleged mastermind behind the collection of hundreds of millions of yen in public funds through fake COVID-19 subsidy applications.

The Metropolitan Police Department announced on June 13 that it had arrested Daiki Matsue, 31, whose address and occupation are unknown, on suspicion of fraud.

It is the latest in a string of related arrests over subsidy fraud, which included a tax official.

The group Matsue is alleged to have led is suspected of fraudulently receiving 200 million yen ($1.5 million) in government benefits.

Investigators said Matsue conspired with other group members and applied for the central government’s COVID-19 subsidy in August 2020 by posing as a sole proprietor whose income had fallen dramatically due to the pandemic. They said he applied under the name of a 19-year-old high school student who was living in Saitama Prefecture at the time.

He is suspected of defrauding the government of 1 million yen in benefits.

He reportedly told investigators that he would talk when his lawyer arrived.

Matsue left for Dubai in February this year. But he returned to Narita Airport in Chiba Prefecture on the evening of June 13 and was arrested there.

Police said the group filed a bevy of fake applications by using the names of some 200 high school and university students solicited under the pretext of investing the funds in a cryptocurrency business. Police said the government was ultimately defrauded of about 200 million yen in subsidies.

Matsue is believed to have received 80 percent of the subsidies from the students for investing, but it is unclear whether the money was ever actually invested.