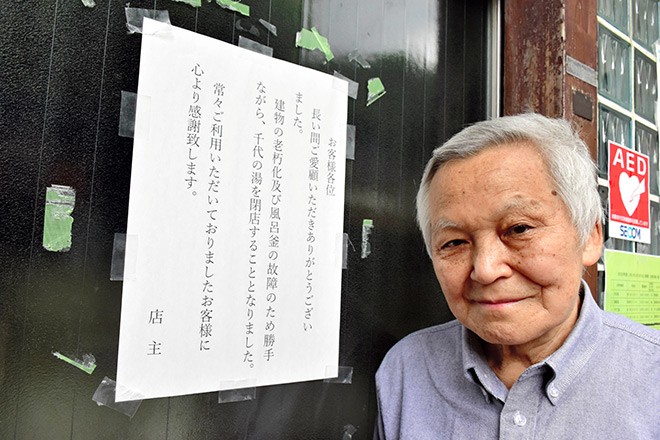 Manager Hiroasa Seto on June 10 stands beside a sign saying the Chiyo No Yu public bathhouse in Tokyo’s Nakano Ward has closed down. (Hideaki Sato)

Many small- and medium-sized businesses that survived through the COVID-19 pandemic are closing down because of the rapidly weakening yen and soaring inflation.

Although the yen’s depreciation has inflated the profits of large companies that operate overseas, 100-yen shops, public bathhouses, dry-cleaning shops and other familiar local businesses cannot absorb the price increases.

Economists say the days of a weak Japanese currency and higher consumer prices will likely continue for the foreseeable future.

Teikoku Databank Ltd. on June 8 said 517 businesses went bankrupt in Japan in May, a 12.1-percent increase from the same month in 2021.

It marked the first year-on-year increase in bankruptcies since May 2021.

It would be the first increase since July 2020, one year and 10 months ago, if the stalled legal procedures for bankruptcy filings during COVID-19 states of emergency are taken into account.

Most of the companies that went bust in May were small- or medium-sized, and many of them cited difficulties in dealing with rising prices of materials and fuel.

The government’s COVID-19 support measures have helped businesses stay afloat, but they are struggling again with the rising prices and weaker yen.

“The tide is turning,” an official at Teikoku Databank said.

These smaller companies buy and use materials and fuel imported by large companies. But the big suppliers have raised prices, particularly since Russia’s invasion of Ukraine in February.

It is not easy for small- and medium-sized companies to pass on the extra costs to consumers, who are already struggling with nonexistent or minuscule wage hikes.

For 100-yen shops, increasing prices above the 100-yen mark would defeat the purpose of their name.

Prodire Inc. closed all nine of its 100-yen shops in Tokyo by the end of May.

The Chiyo No Yu public bathhouse in Tokyo’s Nakano Ward closed its doors for good on June 4 after 70 years in business.

The number of customers to the bathhouse during the COVID-19 pandemic was around 50 a day, one-third of the peak figure.

Rising electricity and gas prices added to the difficulties.

Its monthly gas bill around spring, when the weather warms up, was normally about 200,000 yen ($1,480). But this year, the costs at times have nearly doubled the average.

“In the final days, we were operating the bathhouse just to pay the gas bill,” Hiroasa Seto, 79, its manager, said. “We managed somehow because we were a family business. We would have lost money if we had employed people.”

In a survey by Keizai Doyukai (Japan Association of Corporate Executives) on member companies this month, more than 70 percent of respondents said they think the weaker yen is having a “negative impact” or a “somewhat negative impact” on the economy.

Only 3.1 percent said it is having a “positive impact” on the economy.

“Small- and medium-sized companies have weaker procurement power than their larger counterparts and are more vulnerable to price increases on imports caused by the weaker yen,” said Shunpei Fujita, a deputy chief researcher at Mitsubishi UFJ Research and Consulting Co.

“The key for their survival is how they can pass on (the rising prices) to consumers and increase profits because demand could still rebound in the recovery from the pandemic,” he said.

Many large companies, however, are benefiting from the yen’s depreciation.

According to SMBC Nikko Securities Inc., total net profit for 1,321 companies listed on the former First Section of the Tokyo Stock Exchange (excluding financial institutions) was a record 34.1 trillion yen for the fiscal year ending in March, a 37.7-percent increase from the previous year.

(This article was written by Hideaki Sato, Yuji Yamashita and Kyosuke Yamamoto.)