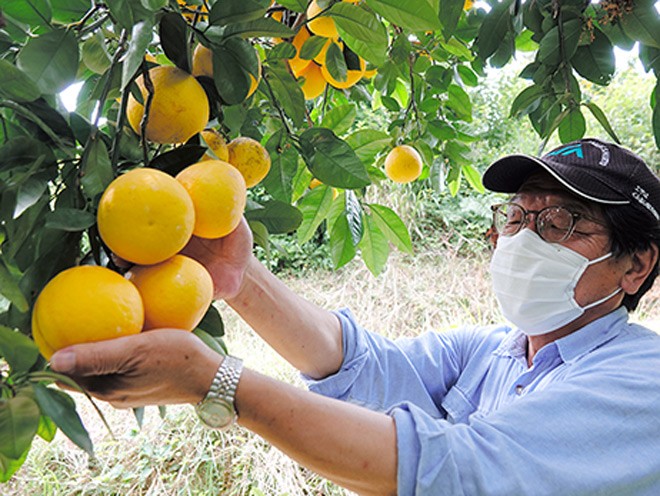 A farmer shows the Kawachi Bankan fruit cultivated according to EU standards in Ainan, Ehime Prefecture, on May 23. (Koichi Amano)

MATSUYAMA--After seeing Kochi Prefecture's success in popularizing the "yuzu" citrus in Europe, the Ehime prefectural government is hoping that promoting the Kawachi Bankan to the continent will bear similar fruit.

The Kawachi Bankan is similar in appearance and size to a grapefruit, but it is less bitter, slightly sweet and characterized by a refreshing flavor.

While farmers are striving to comply with EU standards to cultivate the fruit, a famous French chef raved about its potential.

The yuzu initially became popular in Europe thanks to promotional efforts by the Kochi prefectural government and other parties.

When they hosted a tasting event at a restaurant in Paris--an epicenter of food culture--in June 2011, local chefs and media representatives were drawn to its flavor that differs from lemon or lime.

The yuzu is now used for French sauces, dressings, desserts and other menu items.

"Yuzu succeeded after its aroma and sour flavor became popular. The Kawachi Bankan also has the same strength," said an official at the Ehime prefectural government's brand strategy division.

In 2020, 9,076 tons of Kawachi Bankan were harvested in Ehime Prefecture, making it Japan's largest production area of the fruit, which is shipped between late March and mid-July.

Citrus fruits cultivated in the prefecture are mainly exported to Asian countries and regions such as Taiwan and Hong Kong, but almost never to Europe.

With the domestic market continuing to shrink due to the declining population, it is crucial to have access to a wide variety of markets, an official said.

To export raw fruits to Europe, they must be grown with chemicals that meet the European Union's standards.

In Ainan town, which ranks first in Kawachi Bankan production in Japan, JA Ehime Minami, an arm of the Japan Agricultural Cooperatives, cultivates the fruit in fields with a total area of about 2,000 square meters in compliance with EU standards.

Because there is a tendency in the European standards to require fewer chemicals than in Japan, farmers are struggling to produce the citrus with a beautiful yellow color and with no spots or scars.

"Because I use chemicals different from those used in Japan, I need to feel my way through to find the right timing to use them, for instance," said Yoshiyuki Minamoto, 64, who works for JA Ehime Minami. "Now that we are exporting the fruit, we want to produce it beautifully."

In May, when Kawachi Bankan trees bore fruits in the fields, Frederic Jaunault, 60, visited Ehime Prefecture.

The renowned chef has demonstrated his skills at famed restaurants.

He was named a Knight of the Order of Agricultural Merit by France, and became the European champion at a vegetable and fruit carving contest.

Jaunault visited the Kawachi Bankan fields in Ainan to exchange opinions with producers, while he also gave a lecture and made a dessert for a live event at the Ehime Culinary Arts College in Matsuyama.

The chef raved about the Kawachi Bankan.

He said that every part of the citrus---from the peel to the fruit--can be used for cooking and that its uniquely elegant aroma makes it a great seasoning for meat and fish while it can also be used for desserts.

He added that it is his duty to make the citrus known among top-level artisans in Europe.

The prefectural government's brand strategy division intends to send its staff to France and Germany in or around July to promote the Kawachi Bankan, depending on how the COVID-19 pandemic progresses.

"Feeling the passion of local producers, Mr. Jaunault is highly motivated. We want to gain assistance from him for making presentations in Europe to develop a market," said Koji Kobayashi, a senior official at the division.